Retrofit of a Hitachi-Seike VK45 mill

Less More
22 Feb 2021 03:05 #199674 by ZincBoy
Retrofit of a Hitachi-Seike VK45 mill was created by ZincBoy
I started with LinuxCNC on a Joe's 2006 wood framed router and really appreciated the flexibility the open system provided. From there I converted a 10x22 lathe to CNC and then acquired a Novakon NM145. Both of those machines were running LinuxCNC and still are running now. The Novakon was okay but I found I had to really baby it when it came to speeds and feeds. It just didn't have the power or rigidity I would prefer.

With that in mind, I started watching Kijiji for conversion candidates. My criteria were that the machine had to have a tool changer and had to fit in my garage. This ruled out the bridgeport conversions and anything larger than a 40" class machine. After a few months of watching, a Hitachi-Seike VK45 popped up for sale. Not much on this machine is on line, but I found it had a 30x18x18" work area and a 10hp 6000rpm spindle. It also had a 20 position tool changer. Looking at the dimensions I could find, it also looked like it would fit in the space I had available. The ad also mentioned that there were problems with the control. So a good candidate for a retrofit.

So I hopped in my car and headed out to see the machine. Luckily the machine was powered when I got there and I was able to test things out. The Y and Z axis worked fine. The X axis would run away when the amplifier was enabled. The spindle drive would not start and just showed errors. The tool changer didn't work but it was all there. The tool changer issues seemed to be due to control of the hydraulic solenoids being dead. From what I could see, mechanically the machine was in great shape but the controls were mostly dead. The only real concern I had was not being able to run the spindle. It was smooth when turned by hand so not completely shot. I figured worst case I would need to rebuild the spindle.

After some negotiation we agreed on a price slightly above scrap value. The guy selling it didn't want it to go to scrappers and was happy I was going to rebuild it. A rigging company was hired to move this beast as it weighed in at 12000lbs. I removed the Z axis balance cylinder, encoder, and a bunch of sheet metal in order to fit it out of the sellers shop and into mine. There was about 2" of height to spare when moving it in. Glad I hired professionals! They actually put down 1" thick 8'x30' steel plates on my driveway to keep the forklift from sinking in. 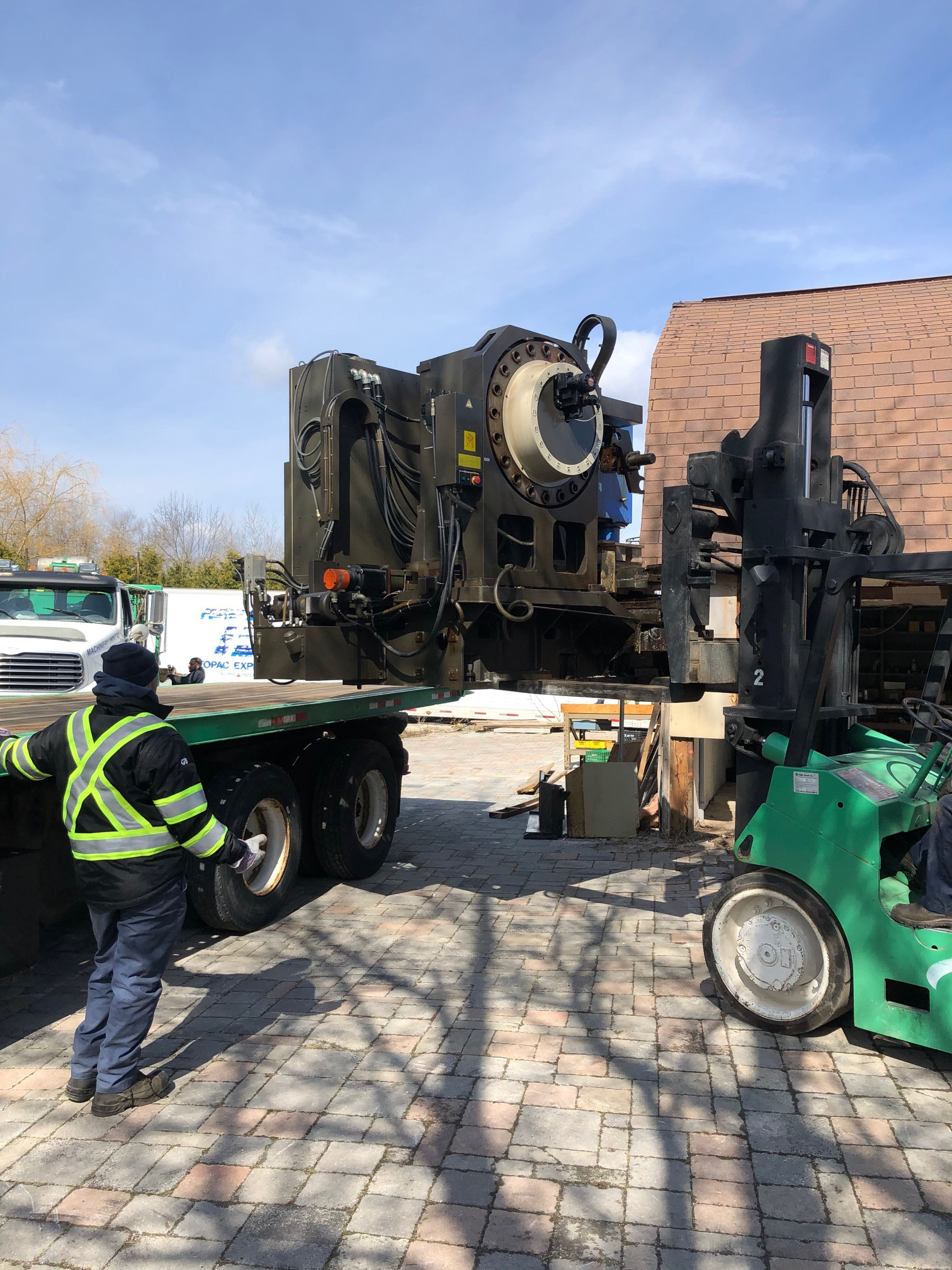 And placed in my shop ready to start the conversion: 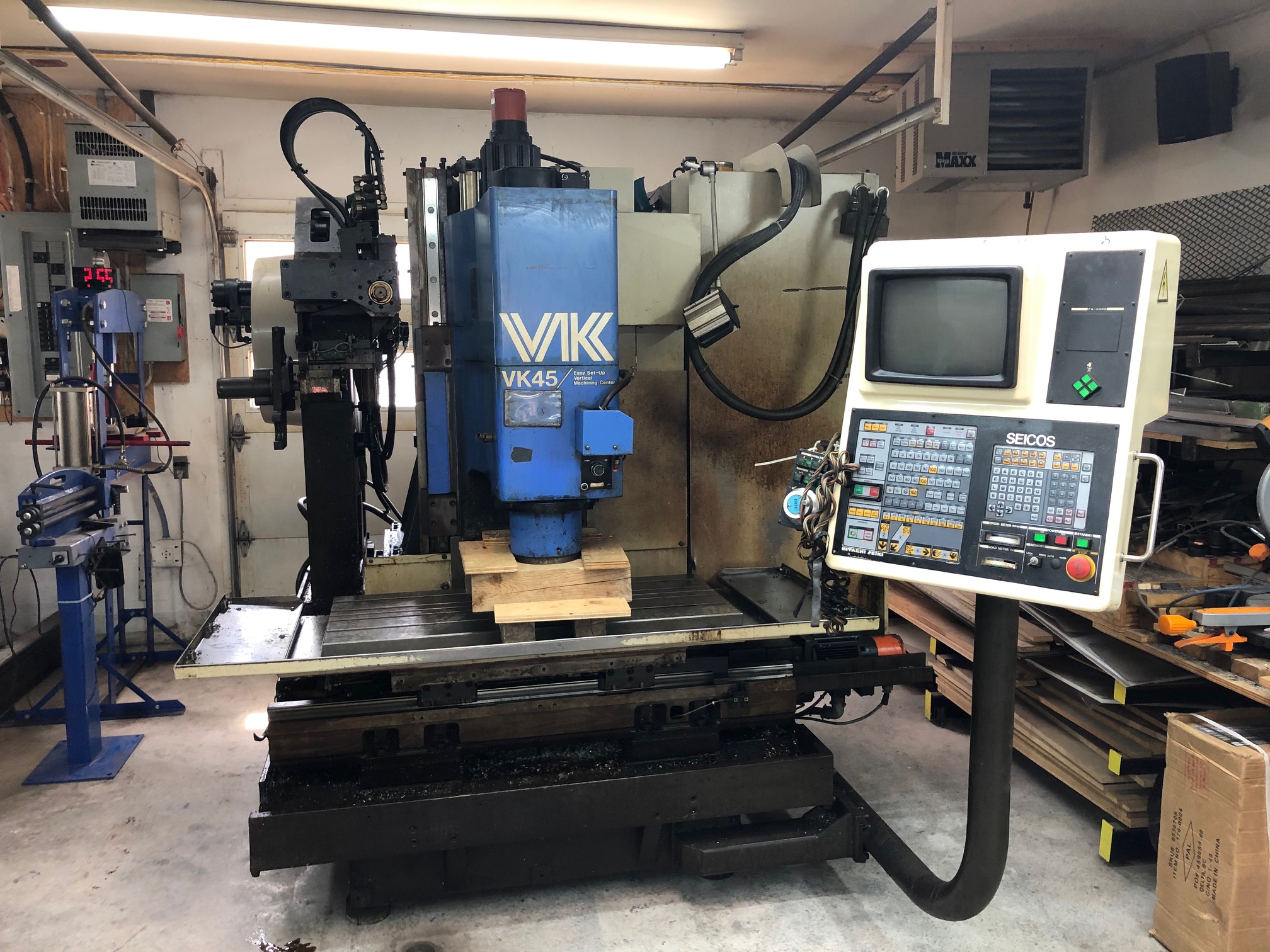 This was all about a year ago so I am close to being done with the conversion: 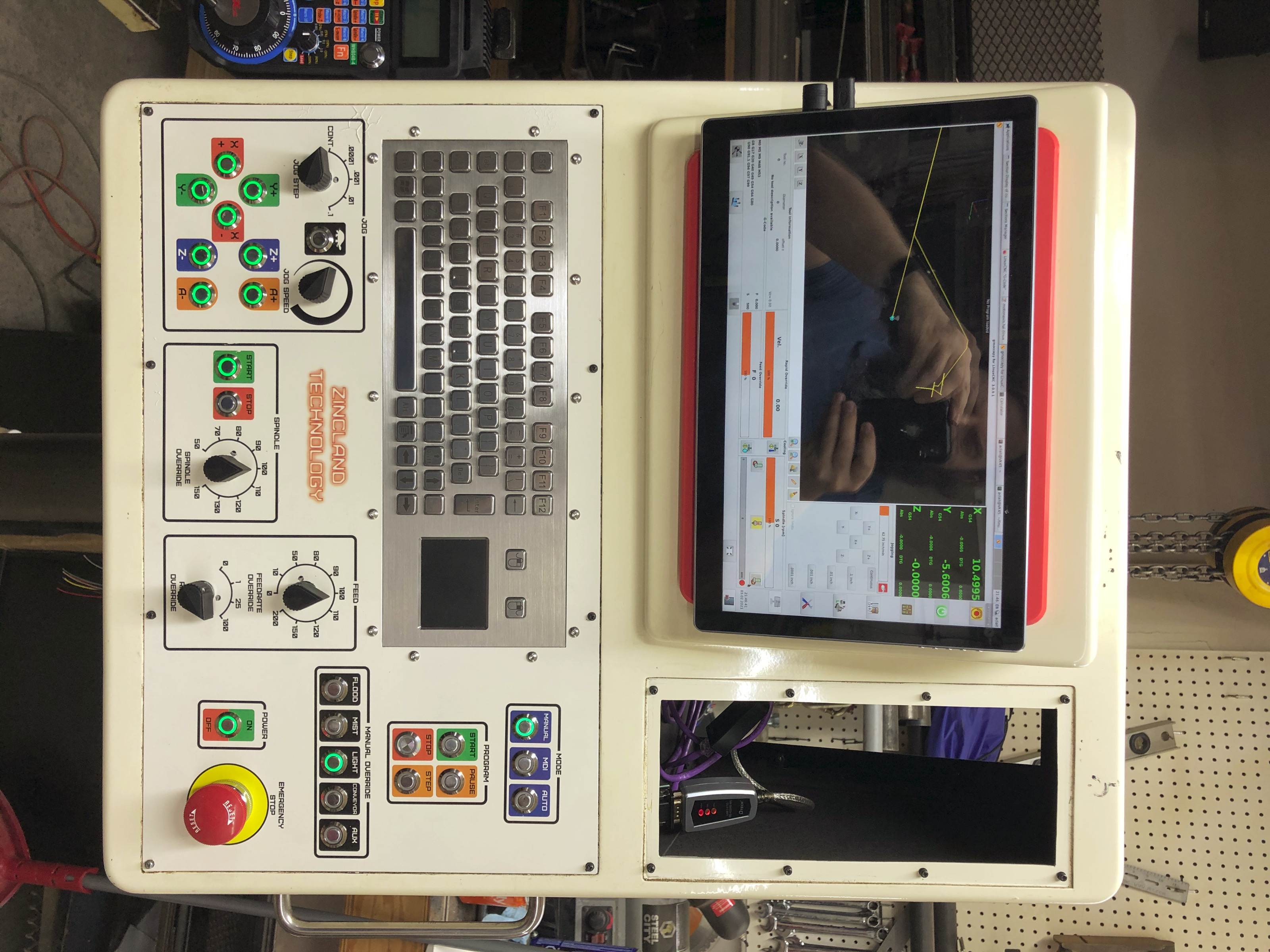 I don't know why this ends up rotated by 90deg. I don't seem to be able to fix it though so just turn your head

Less More
22 Feb 2021 08:00 #199686 by chris@cnc
Replied by chris@cnc on topic Retrofit of a Hitachi-Seike VK45 mill
Congratulations. This was hard work. I only know this machine with seicos control and so had my problems. If you have the ATC up and running, I'll fall on my knees in front of you. Maybe you can give me a tip about the Fanuc encoders. I couldn't talk to them.

chris@cnc wrote:
Maybe you can give me a tip about the Fanuc encoders. I couldn't talk to them.


Mesa have an FPGA firmware that can talk to some Fanuc encoders.

Less More
22 Feb 2021 14:54 #199713 by ZincBoy
Replied by ZincBoy on topic Retrofit of a Hitachi-Seike VK45 mill
My machine did not come with the Fanuc drives/servos but the Seicos ones instead. The Seicos motors have a simple quadrature encoder that is easy to interface with Mesa hardware.

The tool changer is working and here is an early video of it:


The spindle orientation has been improved since then and things sped up a bit.
The following user(s) said Thank You: tommylight, johnmc1

I hope never he's in pain

Less More
24 Feb 2021 03:37 #199924 by ZincBoy
Replied by ZincBoy on topic Retrofit of a Hitachi-Seike VK45 mill
Thanks for the comments. It has been a ton of work but quite rewarding to see it come together.

Onto the controls side of things:

One of the major selling features of this mill was the fact that it came with a full set of manuals. Exploded mechanical drawings, full electrical diagrams including pinouts, ladder logic, and the user and maintenance guides. These were critical in getting the machine to work and it would have added at least a month of tracing the wiring to figure most of it out. Some aspects I would not have gotten working without the manuals as I would have no idea what they were supposed to do. I don't think I would tackle another conversion if at least the electrical manual was not available.

As mentioned previously, the machine came with the SeicosII control. As this machine was built in 1986 or 87 the control was based on an 8086 processor and was very limited in program space. It came with paper tape reader as it's primary input method.

After testing as much as I could with the original control running I found the following:
1) X,Y, and Z servo drives were good and working well when tested without the control.
2) X,Y, and Z servo motors and encoders were working well.
3) The X axis could not be controlled as the motion control board output was stuck at -15V.
4) The Yaskawa spindle drive was dead with a "FU" code being displayed and no signs of life
5) Multiple solid-state relays to control the hydraulic solenoids were burnt out and that is why the tool changer didn't work

The servo drives and motors being good was a big relief as they could be re-used. They are +/-10V input velocity mode drives so easy to run with LinuxCNC. The X axis fault being with the controller was also good news.

The spindle drive failure was a big disappointment. It was claimed to be working "just before you got here" when I inspected the mill. After getting a quote on repair or replacement of $5000 and $10000 from Yaskawa I decided I would go with a VFD. This will be a topic for a post by itself as there were quite a few issues getting this to work.

I was hoping to re-use the solid state relay boards that came with the mill. The Seicos system uses a rs485 like serial bus to control IO boards that are part of its PLC system. I was going to reverse engineer the protocol and build a translator but that would have been a significant effort. The fact that the few replacement SSRs I could find were $50 each and I needed around 16 of them put re-use out of the picture.

In the end I ended up mostly gutting the controls and re-doing everything with Mesa cards. On the keep list: servo drives, contactors for hydraulic pump, coolant pump, chip conveyor, and the 200V to 100V control transformer. And the music generator board that drives the alarm speaker because I liked it

Everything else was removed: 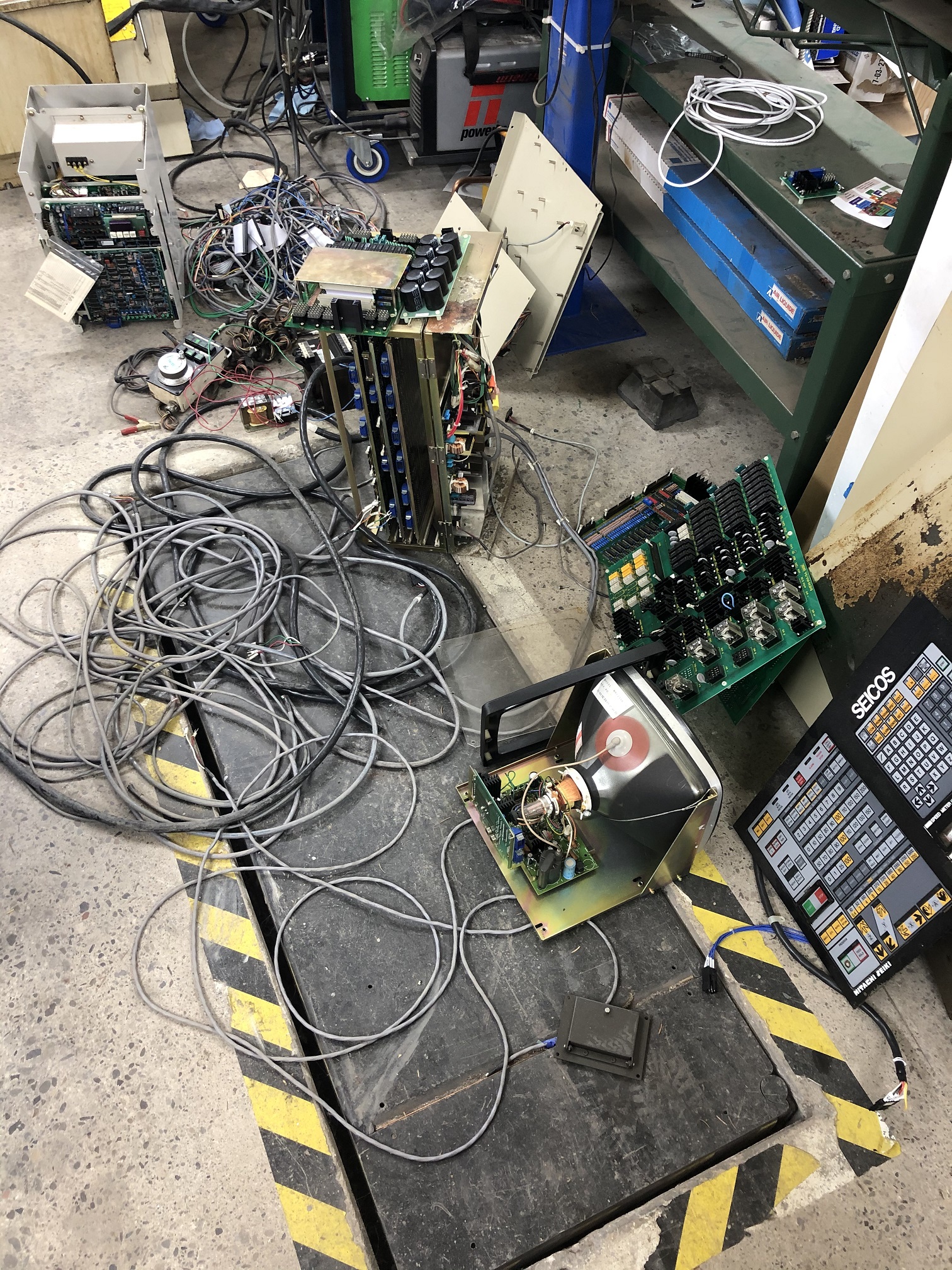 The Mesa boards I ended up using were the 7i98 ethernet FPGA card, 7i77D analog servo card, 2x 7i84 isolated IO cards, 1x 7i73 pendant interface card, and the 7i74 8 channel serial breakout. The 7i77 did not have enough IO on its own so the 7i84s were used to expand. One 7i84 was located in the main control cabinet and the other is located in the tool changer control box. This is pretty much exactly the same as the control scheme for the Seicos system. The 7i84s are great cards as you just need a single cat5 cable and field power wires to get 32 inputs and 16 outputs. 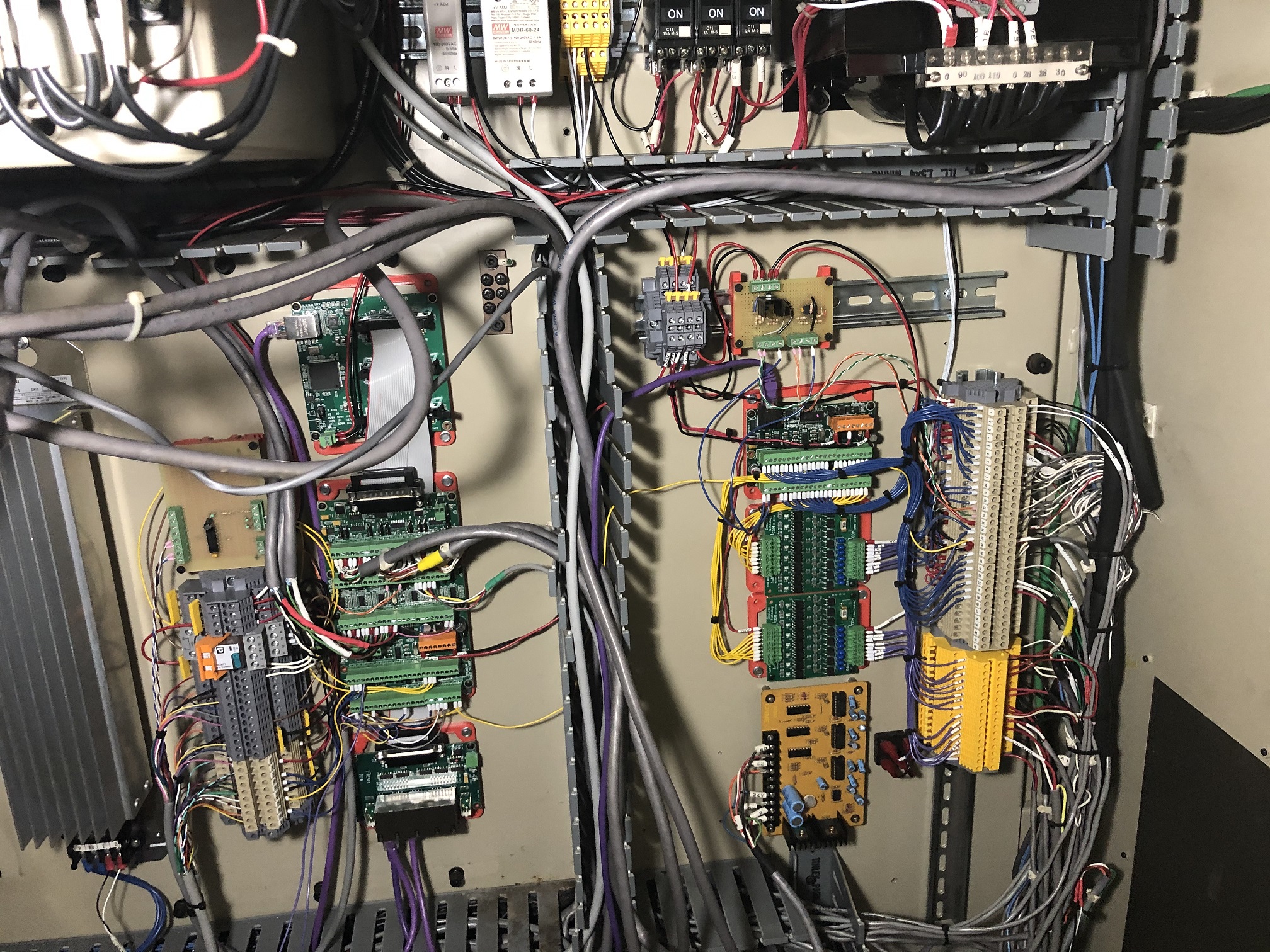 Still needs some tiding up. The cable channels did not have covers when I got the machine and I haven't gotten around to finding the right size to replace them. 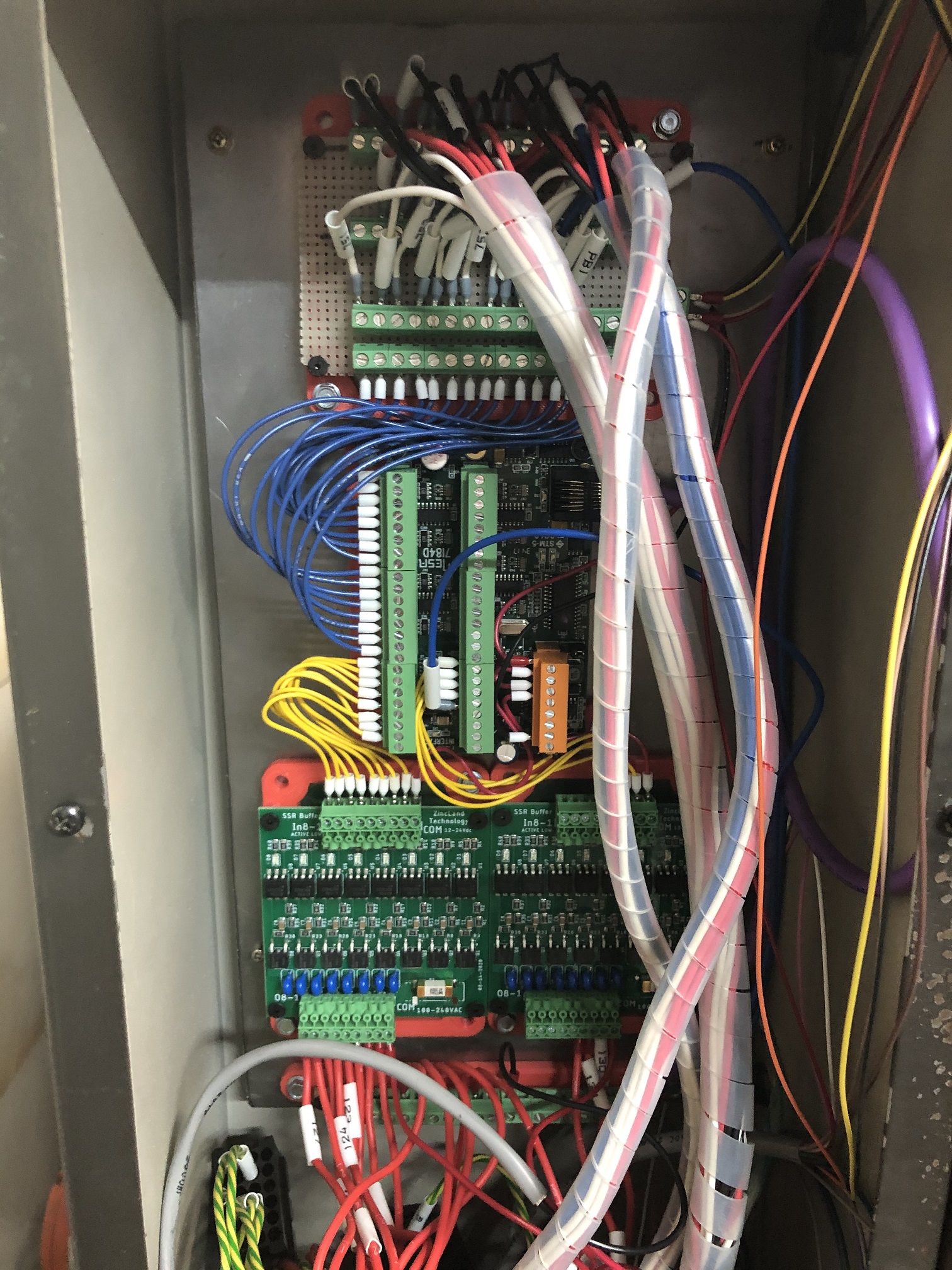 I have a spreadsheet that documents all of the connections so I can figure out what I did later. It would be too much work to create a schematic of everything and it is pretty simple with most connections just being from point A to B.

Less More
26 Feb 2021 00:48 - 14 Aug 2021 18:14 #200154 by ZincBoy
Replied by ZincBoy on topic Retrofit of a Hitachi-Seike VK45 mill
I thought I would add my configuration files for future reference. They are not 100% done but pretty close. Most everything is implemented with hal components with only M6 being partially remapped g code.Components include:frontpanelbuttons.comp: decode the scanned button matrix output of the 7i73 pendant IO board.gearchange4.comp: auto change between high and low gears depending on the spindle speed requestedorientfilter5.comp: perform spindle orientation using a Hitachi SJ700 driveVK45toolchange2.comp: control the tool changer on the VK45 mill.And a bunch of other helper functions that are less interesting but needed for the system to function.My plan is to get into the details of how each of these work as time permits.

Less More
09 Mar 2021 21:15 #201596 by J Green
Replied by J Green on topic Retrofit of a Hitachi-Seike VK45 mill
Very interested in your SSR ? boards. Looks as if you made them yourself. Would be interested in more details about them.
I admire your work , you have put a lot of thought into the conversion an lots of finesse into doing it .
Bob
PS Big thanks for including tthe Zip files