Sense checking my plan for 'moving' from Mach3.

I'm moderately new to the world of CNC. I have been 3D printing for a while, I built a mpcnc a few years ago which works off marlin and an arduino mega, and have a gbrl mini mill that I use for making milled prototype PCBs.

I have just bought a nearly new chinese 6040 desktop CNC mill. It comes with an old tower PC running windows XP and what is almost certainly a knock off version of Mach3. It is a parallel port interface unit to control the 3 axis of movement and also a VFD for the spindle. I havent opened up the control unit yet to look at what control board is fitted.

I have not used Mach3 before, but rather than learn something that I dont think I will want to stick with I would like to move over to LinuxCNC.

I wanted to sense check the process with you kind people before I end up getting myself tied up in knots. I have some experience with linux from a few years ago and am competent with running it on raspberry pi's, but this is a little different.

I am planning in the first instance to run linuxcnc on an old lenovo T42 Thinkpad I have (because it has a parallel port). If this is a bad idea please let me know now

I think I need to:

1) download a specific RTOS kernel version of debian that is suitable for the x686 processor line (so 32 bit). Is there a link to this in the downloads section as I couldn't see it specifically only the prebuilt 64 bit versions.

2) install from the linuxcnc image via a USB stick. I can get the T42 to boot from the stick I have into the linuxcnc installer, but I only have the 64 bit version so havent got past this point.

3) configure linuxcnc to run using the settings for running the 6040 that are already in Mach3. I read somewhere in one of my searches that there is an export tool for converting settings on Mach 3, is this correct.

4) connect everything up and have a play, being ready to hit the emergency stop

Are there steps missing? Is the above correct? Anyone have any pointers for me?

Thanks in advance, sorry for the noob question - I feel like things are quite far down the line from the old x686 processors now and perhaps thats why I am getting myself a little confused. The only other machines I have to use in the workshop are small machines like the HP elitedesk but it is going to be very difficult to add parallel support to this from what I understand.

Less More
17 Apr 2022 11:51 #240460 by robertspark
Replied by robertspark on topic Sense checking my plan for 'moving' from Mach3.
linuxcnc is NOT recommended to run on a tablet or laptop. the reason being is the power saving and speed boost features that I believe generally cannot be disabled. linuxcnc requires regular clock cycles for timing, exven more so if you intend to run a parallel port setup (I have never tried that... I always recommend Mesa hardware)

if you are new to linuxcnc just install it from the ISO via USB stick.

Less More
17 Apr 2022 12:10 #240463 by jimmyhorns
Replied by jimmyhorns on topic Sense checking my plan for 'moving' from Mach3.
Thanks - I also have the option of using the desktop tower that is currently running Mach3, but did not want to mess with this until I at least had something working on the T42. It sounds like (providing the desktop is reasonable) that this would be the better option.

I think the downloads in the link you gave are all for 64 bit machines rather than 32 bit, which is where I am coming unstuck at the moment, so wondered if there were 32 bit builds available somewhere on here that I am missing?

Less More
17 Apr 2022 12:12 #240464 by tommylight
Replied by tommylight on topic Sense checking my plan for 'moving' from Mach3.
www.linuxcnc.org/iso/linuxcnc-2.7.14-wheezy.iso
That is a 32 bit version with LinuxCNC 2.7, i am pretty sure it can be upgraded to 2.8.x, but it is not supported anymore and updates/upgrades do not work out of the box, so a bit of searching can make it update and upgrade to last officially supported packages.
IBM T42 should work nicely, i used and still use some of those with Ubuntu 10.04, so almost 12 years with no updates and no issues ever.
You will have to disable plenty of stuff in the BIOS though and use a 50k to 60k base period.

you can the just install from the ISO 2.8.2 and stuff works out of the box.

especially when you are new to linuxcnc.

instead you cut corners to save a few bucks get annoyed and say linuxcnc is impossible and then want to use something else.

as part of research. try to establish the easiest path, not the cheapest.  once you have mastered Linux and linuxcnc then try the complex stuff that may make it cheaper for you.....

it's not about the money or money cost of one's time. it's that time is expensive.... you only have 1 life and you don't know how long it's going to be .... the older you get the more expensive time gets..... use time wisely..... no point in reinventing the wheel..... unless you are short on money and don't value your time.....
TIME is very valuable


using linuxcnc with the parallel port is old hat... like using a classic or vintage car for a daily driver.  sure it can be done.  the brakes will be poor, the handling rubbish and the fuel consumption too... but it'll probably be a cheap buy.  your driving experience will be greatly improved using a more modern daily driver where you can keep pace with the traffic flow.... same with linuxcnc.....  why walk bare foot when there are shoes and easier options.  there is also other hardware solutions too such as

sorry not tried any of those... just Mesa hardware and it works with little learning curve
Last edit: 18 Apr 2022 06:56 by robertspark. 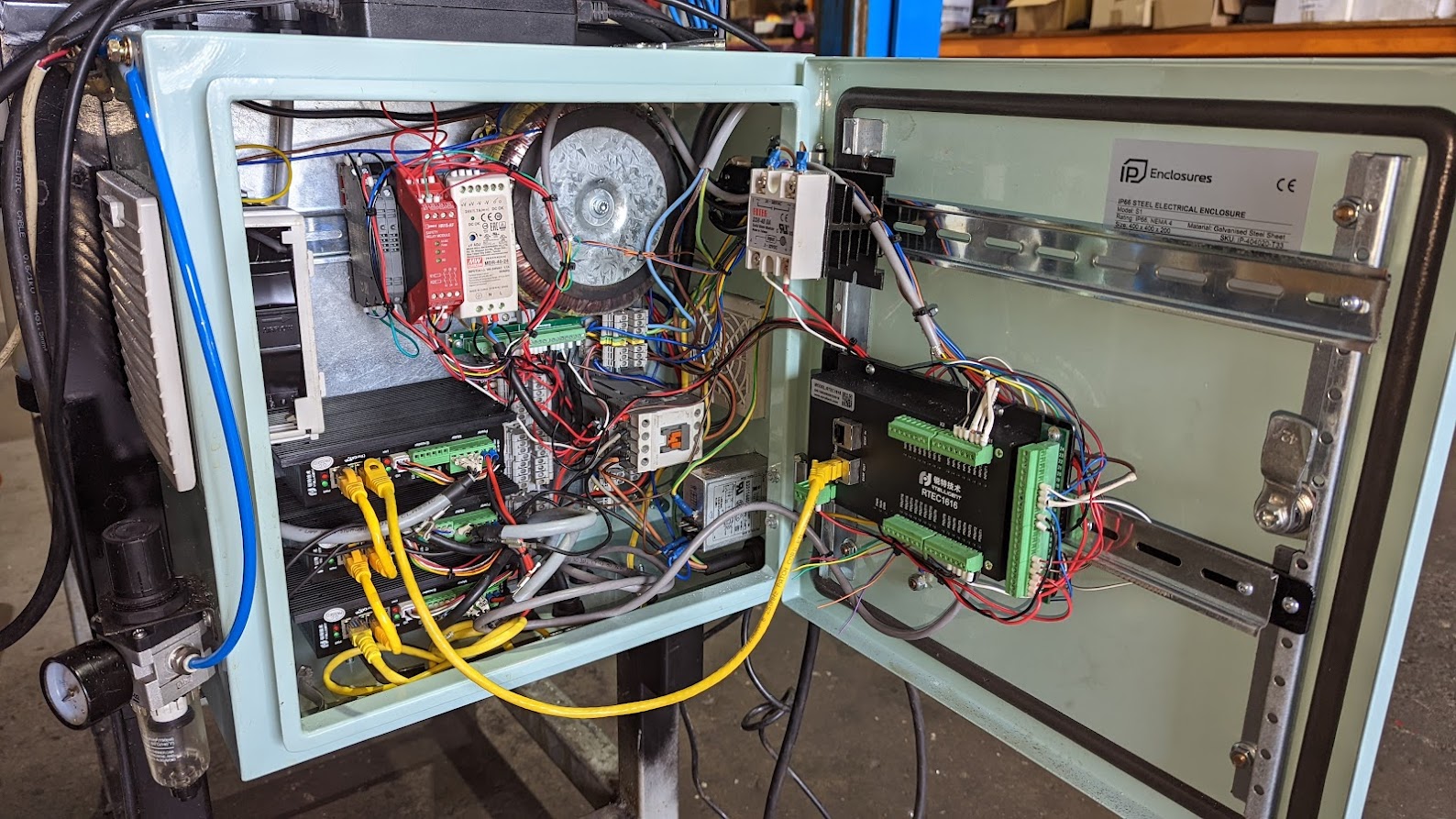 Less More
18 Apr 2022 11:01 - 18 Apr 2022 11:04 #240551 by tommylight
Replied by tommylight on topic Sense checking my plan for 'moving' from Mach3.
Parallel port WORKS perfectly well, on industrial machines, in use daily, all day long.
It works so good that i have a plasma cutter working for over 2 years with it using THCAD !!!
-
And stop comparing LinuxCNC to mach3, it is not the same thing, not under any conditions or use cases.
How many industrial machines use mach?????????
NONE!
-
Parallel port is extremely reliable, and extremely usable for machine control.
-Offer options and solutions and advice, not solutions nobody asked for, or out of reach of the person asking.
I am guilty of doing the same thing over and over again (not comparing to mach, never), so this is me getting older and wiser, i guess.
Last edit: 18 Apr 2022 11:04 by tommylight. Reason: more info

Less More
18 Apr 2022 17:37 #240574 by robertspark
Replied by robertspark on topic Sense checking my plan for 'moving' from Mach3.
I didn't say it didn't work with parallel port what I said was if you are starting out with Linux and linuxcnc use an easier route. why make life more difficult than it needs to be

I think you will be surprised how many machines have used mach3 and use mach4.

it's just different. one is not better than the other, both have advantages and both have disadvantages.

Well it was not, your advice was useful and with options, Rod was a bit off with the comparison and the Ethercat for a new user with parallel port. But the advice for a used PC was good as they are plentiful and cheap.

And Robert, i will not be surprised at all by how many use that cr@p (my opinion, ne, my conviction), but i am terrified at how many are willing to put up with the mess they do in use. It is the same thing with Windows et al.
Also, again not in the same ball park ... or planet, mach is barely usable for very simple machines, LinuxCNC is extremely reliable for extremely complicated machines, and versatile, and easily modified, and....
-
It just occurred to me, Robert is pulling me leg !

-
Still, i really, really hate the comparison,it is NOT the same thing.
Demeaning LinuxCNC just because it is free is not polite and is demeaning to all the contributors and developers and the entire LinuxCNC community.