Confused about hardware to get

First, I intend to keep my current setup which has a parallel port BOB like the attached image and interface this with the Orange Pi GPIO pins which appears are only 3.3V tolerant.

For the outputs from the Orange Pi, they would interface with the 74HC245 chips on the BOB. These chips apparently only get power from the USB connector on the BOB. Thing is I have never had anything connected to that USB, and yet the machine works just fine using an Arduino (5v I/O) running Grbl for control. Also the attached image shows that any inputs like for limits going back to the Orange Pi go through optos meaning no 5v back to the orange Pi. So from the circuit shown in the attached image, it appears that without the USB power there is nothing that would be able to send 5V back to the Orange Pi and blow the GPIO. Since I am an amateur regarding electronics, this raises a few questions for those with more electronics savvy than I.

1. Based on the circuits shown in the attached image do you concur that there would be nothing that could send 5V back to the Orange Pi provided there was no input at the USB connector on the BOB?

2. Why does it work without USB power at the BOB with my Arduino?

3. Do you think connecting the Orange Pi GPIO to the BOB through a patch cable without any logic level shifting would work reliably and safely without USB power on the BOB? 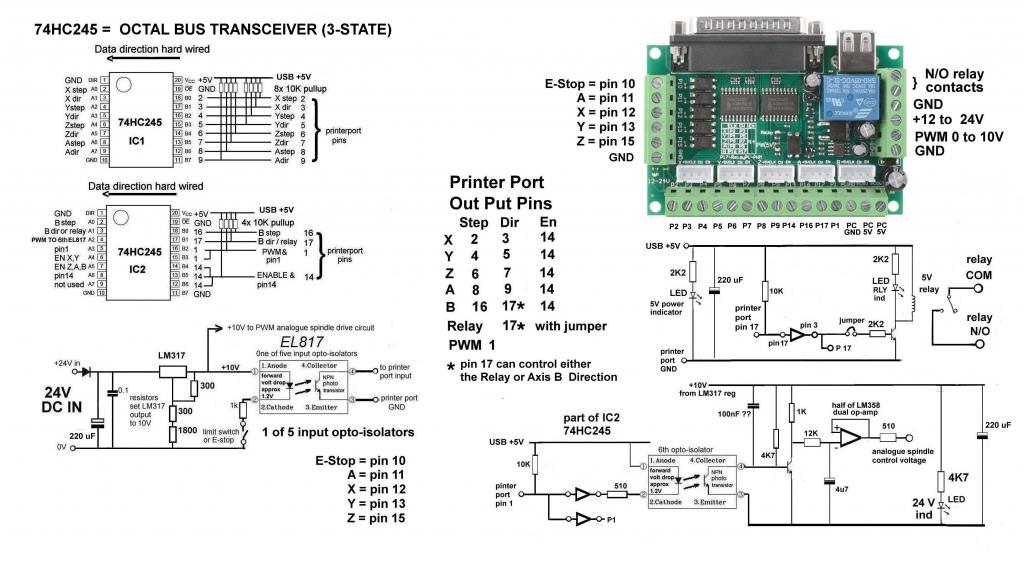 Less More
18 Sep 2021 00:20 #220965 by rollfree
Replied by rollfree on topic Confused about hardware to get
Working without external supply: you use parasitic power from data lines. Not good idea.

+5V back to OPi GPIO: there are pull-ups on inputs from OPi. But they are relatively high impedance, so it will be probably without problems.

But on outputs of optrons there are no pull-up resistors. On standard LPT port this resistors are on inputs. But on OPi will be only very weak pull-ups, so the inputs will be very slow (on transition ON-OFF) and will be very sensitive for interference. Better use external pull-ups.

1. For the OPi outputs, just run them direct to the BOB
2. Use 3.3v from the OPi to power the 74HC chips through the USB connector
3. for the OPi inputs install pull-up resistors to 3.3v.

Does this sound right? And is 10K pullup ok?

Thanks for your help. It is genuinely appreciated.

Pull-ups on the outputs of optocouplers (OPi inputs) prefer a little smaller. Let's say 3k3 (1k-4k7) so that the switching is fast enough and there is good noise immunity.

Another question. Since I have been laid up with a broken ankle it has given me time to think about future implementations and projects. i asked this in the Orange Pi thread, but will ask he in terms of the RPi/Mesa option.

I have a small lathe that I have been wanting to CNC, but if I do that, I would absolutely want to have a spindle encoder so that I could have synchronized motion for threading. Also, rather than just a wireless pendant like the mill will have, I would want to put on two hand wheel encoders, one for the X axis and one for the Z axis so that the machine could still be used sort of manually. The axes would be stepper driven.

So for this it seems I would need 3 encoder inputs, and 2 step/direction outputs, plus a few other for limits, etc. In looking at the mesa options for using with the RPi via ethernet, I am unsure which boards would be capable of the 3 encoder inputs. Would a 7i92 be able to do this without another card? Is there another better option for mesa card for this?