I presume symbol 19A1 is the electronic controller you refer to as the 'logic unit'. If the 24V supply is not there then of course the controller can't be running. If the 24V supply is there then I would expect some kind of indicator on the device showing it's state. (ie RUN or Fault or something). If it seems to be running then it's likely not getting an input signal needed to satisfy the internal logic. In this case you will want to get a clear picture of what the logic inputs are connected to on the machine (ie sensors, buttons, switches etc) and try to deduce from that what might be required for the machine to be running. As a rule of thumb I would check the inputs and see which have a 24V signal coming in and which don't, likely it's an input that is missing a 24V signal that is blocking the logic but not necessarily.
There may of course be a remote chance to read the logic program from the device through a serial interface but you'd have to really be in love with the old controller to put in that much effort to save it.

So I think what you suggest is correct, ie. this must have to do something with the inputs. The problem is that this part of the wiring differs from the schematics. For example at the column 278 here there are some switches that are described as "microswitches of the enclosure, lock":

so my first thought was: OK, maybe it's something as dumb as some kind of switch that checks if the enclosure is opened, but then I couldn't find any switch like that and it turned out that the points listed there (403, 456) are not connected to the input. Which looks like maybe on some machines there were switches like that, but not on that particular machines. I will still maybe go over some of the points that are in fact connected to the inputs over the weekend, but I agree with you - if it's not something I can catch quickly, it won't be worth it to debug the thing. Especially that I can probably sell the controller and the display/keyboard assembly for a decent price. One drawback of getting rid of the entire controller will be that I will have to give up the EXE components as they are integrated inside the controller, but there's lots of standalone EXE modules on Ebay and most of them are in 60-80EUR range, so that's not a big problem. And then the placement of the controller would work great for a motherboard with LinuxCNC, so again, I would prefer to get rid of it.

Anyways, I'll write an update soon, but I'm close to pull the trigger on the Mesa cards

The problem is that this part of the wiring differs from the schematics. For example at the column 278 here there are some switches that are described as "microswitches of the enclosure, lock":

I would think that is why that part of the schematics is in a dashed box marked with an asterisk (*) in the top right corner. (ie. this part is optional)
The following user(s) said Thank You: drogus

Points 160 and 303 are basically connected to ground.

376 is quite interesting - it's coupled with node 307, which is one of the outputs which is one of the outputs. In the column 271 it's described as a "reaction for the function M, T". In the column 234 (for the outputs) it's described as "address M". Not sure what that could mean, sth about a motor? I'll need to check the voltage on the node 307 and if the contactor connected there works correctly.

400-402 points are for the motor control, likely not important for starting up.

Just had a look, according to the schematic there is another contact of 35K3 but it clearly not at column 245 as indicated:

Are you still only getting fault "47" on the indicator in the electric cabinet (Störstellenmelder) ?

Also, as you probably know, there seems to be a fairly extensive explanation of the electrics starting on page 78.

Thanks a lot and no, I didn't know about this part of the manual! My German is quite basic, so I was translating only selected parts of the manual and I haven't realized there is anything like that. Skimming through those pages now seems like they might have been very helpful in the past weeks lol. I'll do a translation so I can understand it better

> Are you still only getting fault "47" on the indicator in the electric cabinet (Störstellenmelder) ?

Less More
28 Jan 2022 10:53 - 24 Feb 2022 15:28 #233363 by drogus
Replied by drogus on topic A retrofit of a Stanko SMO 32 CNC milling machine (Ukrainian clone of a Maho)
I think I'm getting somewhere. This whole time I was so focused on chasing the farther and farther contactors that I missed a mistake I made at the very beginning. At some point I mentioned the button that bypasses some of the contactors in order to start the hydraulic units (lubrication and power hydraulic). Back then I haven't thought about it that much, but now that I was going through the whole thing again I realized that I have never heard the hydraulic power unit to turn on *unless* I pressed the 3K1 contactor. So I looked at the schematics again and there's a 3F1 (fuse?) thing before the 3K1 contactor in the column 170:

Now I started looking for the 3F1 device and it's on the hydraulic pump: 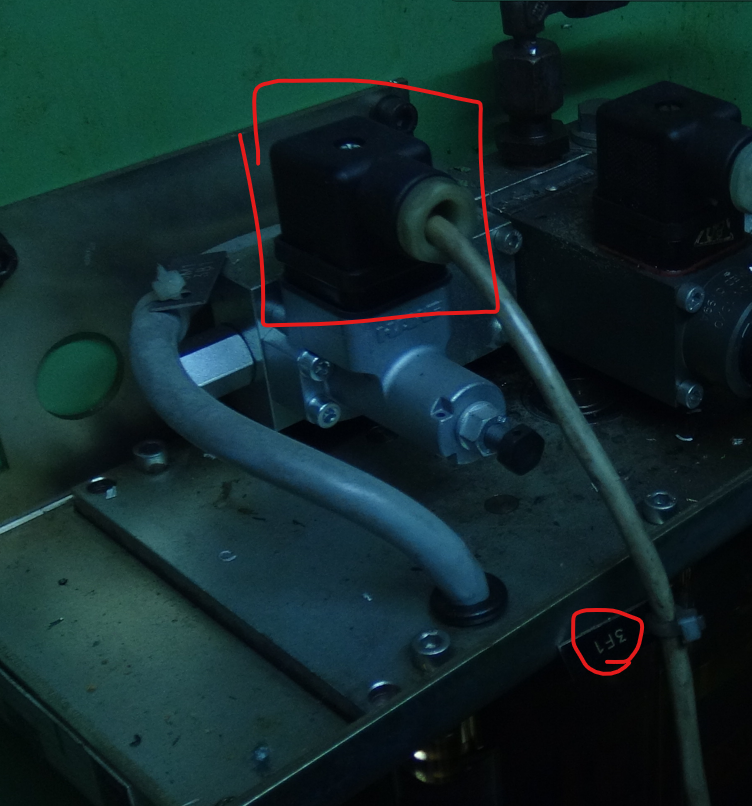 Before I thought that it's a pressure check, but now I'm not sure. Anyone with the similar pump knows how this thing works?

Now that I'm thinking about it maybe it's a minimum oil level check. There are no markings on the minimum level and the pressure gauge is on the right I think. So maybe I just need to add oil?

Less More
28 Jan 2022 11:32 - 24 Feb 2022 15:27 #233366 by drogus
Replied by drogus on topic A retrofit of a Stanko SMO 32 CNC milling machine (Ukrainian clone of a Maho)
I found such a device on an auction and it's apparently a pressure switch, which would make sense when looking at the schematics - whenever it reaches the desired pressure it will turn off the pump. And according to the schematics it's normally closed. The question is, why it's acting like it's open? Might still be some kind of level of oil measure connected with the switch, so I guess I'll buy some hydraulic oil (which I would have to do anyway I guess).

There is something definitely going on in there. I unscrewed the top of the device to uncover contacts and there is a connection between the contacts when the machine is off. But then as soon as the voltage comes in the connection is closed. I thought that maybe the pump is getting up to the pressure too fast to notice, but that would be weird. Just in case I asked another person to hold the "hydraulics on" button while I was looking at the pump and it didn't move at all, so yeah, it seems that something is off about the pressure switch. I will buy the oil to top it up just in case, but if that won't help I'll maybe buy a replacement switch.
Last edit: 24 Feb 2022 15:27 by drogus.

Less More
28 Jan 2022 12:55 - 28 Jan 2022 13:01 #233369 by Aciera
Replied by Aciera on topic A retrofit of a Stanko SMO 32 CNC milling machine (Russian clone of a Maho)
Yes according to the manual.
Page 105:
" The motor of the hydraulic system 3M1 is turned on if the pressure switch 3F1 switches on. Meaning, if the contact 3F1 (166-167) is closed and the starter 3K1 is turned on."
The fact that the contact is open could be to a malfunction of the mechanics of the switch or a bad electrical connection to the cabinet.
I would take off the connector cap and check the contact right at the switch with an ohm meter.

[edit]
Topping up the oil will not likely affect the problem since the contact is supposed to be closed when the oil pressure is low and I presume the hydraulic system is not under pressure at the moment.