Less More
02 Nov 2022 02:28 #255746 by OskarXYZ
Replied by OskarXYZ on topic Uninstalling LinuxCNC
Here is the picture of the SSD partitions

Less More
02 Nov 2022 02:53 - 02 Nov 2022 03:02 #255747 by arvidb
Replied by arvidb on topic Uninstalling LinuxCNC
That's not a picture from gparted though, but from the LinuxCNC installer perhaps? I specifically asked you to boot a LiveCD, run gparted and take a screenshot since it should also show free space on the partitions themselves, which would give better clues to what happened.

Anyway, given the limited info available, and comparing your first post (somewhat sanitized to include linebreaks) with your latest:


my guess to what happened is the following:
1) You resized your 210 GB home partition sda2 to 63 GB (rather than the more appropriate ~170 GB to leave about 32 GiB free space for LinuxCNC).
2) You then formatted this partition, which will have wiped all user data from your Mint install. You also made it bootable, for some reason. (The only thing you needed to do was to shrink sda2 a bit and the Debian/LinuxCNC install would have taken care of creating a new partition in the newly freed space, formatting it etc.)
3) You then installed LinuxCNC to the space freed up from the resizing of your home partition, which created partitions sda3 and sda4.

Your Mint system partition (sda1) is intact, which explains that you can still boot Mint. However all your user data is gone, which explains the long boot time (Mint probably trying to figure out what the heck happened to it) and the fact you cannot "do" anything on your Mint system. It would also explain the “error-no such device 3283a276-4585..." message since its home filesystem would be missing.

Now, I might be wrong about 2) above - maybe, just maybe it isn't formatted and Mint was just trying to cope with there being no free space left on the device. Obviously this makes all the difference - the difference between your data being completely gone or still there. So you need to figure out what's actually on sda2. You could start by supplying the requested screenshot from gparted. But perhaps an easier way would be to mount sda2 in the booted LiveCD. There should be icons on the desktop allowing you to access the existing partitions on the disks from the LiveCD system.

Edit: No, better to supply the gparted screenshot, since the installer doesn't give any filesystem info about sda2. Something weird is going on there.
Last edit: 02 Nov 2022 03:02 by arvidb.

OskarXYZ wrote:
disk 1 is the one I want to recover at all cost

If you are serious about the "at all cost" part, and you don't have proper backups*, then I suggest that you don't touch your disk anymore at all and instead contact one of the companies specialized on recovering data from broken or corrupted harddrives. If you're in the nordic countries, www.ibas.com/ is an example. There are others of course in different parts of the world. They are expensive but they know what they're doing.

DO NOT use any "disk recovery software" if you are serious about getting your data back: while they might work if you're lucky they might just as well destroy any data that's left.

*I have not used Timeshift but they specifically say that it does not backup user data, only system files (e.g. to be able to restore the system after an update).

Less More
02 Nov 2022 04:46 #255751 by OskarXYZ
Replied by OskarXYZ on topic Uninstalling LinuxCNC
Apologies for the confusion arvidb, it’s my lack of experience with Linux…..I don’t know how to start gparted because I don’t see any entry for it. When we are talking about LiveCD my interpretation is the DVD I made to install the ISO for LinuxCNC or Linux Mint and in both DVD’s I see nothing on how to start gparted. If you can tell me I will do so.Before I started any work today my 240GB SSD had 2 partitions, one about 30GB was for the Linux Mint and the rest was free, about 200GB. I selected the 200GB to make a new partition of about 60GB for the purpose of installing on it LinuxCNC, I didn’t install LinuxCNC on the 60GB and when I ask to be formatted it said I can abort the formatting since the 60GB had no data.The only explanation I can give why I can’t start Linux Mint is when I ask to abort the installation I was told it’s not good because it may leave the system in unstable condition but I did it since I had no other choice. All the above is history now, what’s done is done and I want to find out how to recover Linux Mint.Yes it will be nice to be able to see the 240GB SSD on gparted but can you please tell me how to get gparted?To your opinion which way is the best to recover my Linux Mint? My opinion is to format the 240GB SSD, re install a new Linux Mint and then hopefully I should be able to get my Timeshift backup to restore everything I had. Have never use before Timeshift so I don’t know if this is the right approach.I'm in Montreal, Canada and its now 12:45AM on WednesdayMany thanks

Less More
02 Nov 2022 05:07 #255752 by OskarXYZ
Replied by OskarXYZ on topic Uninstalling LinuxCNC
Just remember I had a DVD which contains the software FoxClone, was given to me from a member at the Linux Mint forum and it includes gparted. I hope the attached image is what you are after. Now with Foxclone I can do many things on hard disks but I can’t say I’m an expert with it.I don’t intent to go outside to recover my data. If my data is lost it’s just tons of work for me to re install everything. 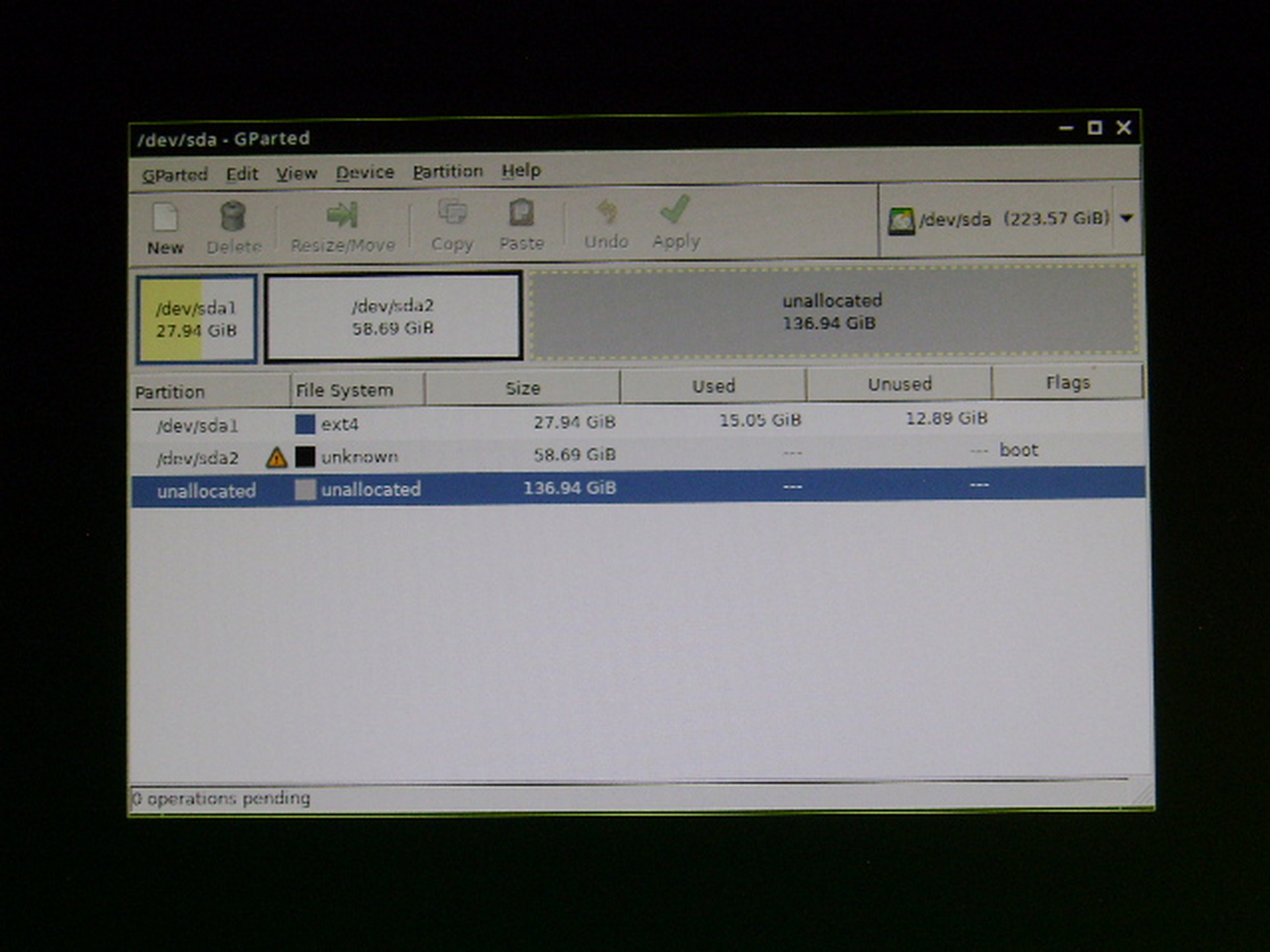 
OskarXYZ wrote:
Before I started any work today my 240GB SSD had 2 partitions, one about 30GB was for the Linux Mint and the rest was free, about 200GB.

What you describe would be one partition (30 GB) and the rest free space. I think you really had two partitions: one about 30 GB and one about 200 GB, the latter containing your Mint user data (mounted to /home). And no free space. At least according to your first post. Again, this explains why you couldn't make the second partition smaller than 62 GB: it already contained that amount of data!

You say you didn't install LinuxCNC, then you say "I asked to be formatted" and that you aborted the installation once already started(?). It doesn't make sense to me and I cannot judge what actually happened. But whatever happened, there does not seem to be any valid data on sda2 (anymore?).

OskarXYZ wrote:
To your opinion which way is the best to recover my Linux Mint?

Since I don't know what happened, and you don't want to go to an outside company to recover your data, I cannot say what the best way is. A few options:

1) Mount sda1, examine it and try to find your data. Since you have partitions coming and going between your screenshots and printouts and give contradicting info about the initial state of the drive and about what you actually did, maybe it really is still there, if Mint's home was *not* on sda2.

2) You could remove your current SSD from the computer, install a new one, reinstall Linux Mint and try to restore your Timeshift backup. This way you can still send your current SSD for data recovery if Timeshift fails. Since I have not used Timeshift I have no idea if it would work. My bet is not since its homepage very clearly states that it doesn't backup user data. But I really have no idea.

3) Or, reinstall Linux Mint on your current drive and take a chance with Timeshift. If it fails, your data is gone for sure.
Last edit: 02 Nov 2022 06:12 by arvidb. Reason: Edited for clarity

Just for info I didn’t ask to install LinuxCNC, when I selected 60GB it ask to be formatted so I was following what the program was telling me but then it said its no required to format the 60GB. In any case I was only working on the 60GB partition, I was very careful not to touch the 30GB where the LM was installed. When I aborted it was asking something to do on the 60GB which I didn’t understand and no installation had started.

Thanks for your time

Mounting makes the files contained in a partition available/visible to the system. It's pretty much always done automatically on a normal, working system.

After booting a LiveCD you could either do this manually (something like 'sudo mount /dev/sda1 /mnt' to be able to access the files on sda1 with a file browser under /mnt) - or, most LiveCD systems will show you any available, valid partitions as icons on the desktop. In this case it would maybe be called somehing like "30 GB file system". If so, just double-click on the icon to open the file system in a normal browser. First prio is to see if you can find anything under the home/ folder on that partition. You should also look up where VirtualBox stores disk images and check that path, obviously (in case it's not under home/).