Taperlock HTD -vs- AT5 with setscrew

spumco wrote:
Is the lack of taper-lock or QD bushing AT5 availability due to location?

Do you have a lathe available? If so, there are some fairly easy options available way better than a set screw.


I'm in Europe and I just haven't been able to find taper-lock or QD AT5 from any kind of reputable, online source. (I don't want to order noname crap from China.) I'm probably just bad at looking?

I do have a lathe but I'm not setup to turn tapers (no compound). But those keyless hubs might be just the thing! Turning precise cylindrical bores is not a problem. Thanks!


tommylight wrote:
I do not think it is from the type of pulley/belt, it is probably due to bad pulley or belt teeth.
I have some mounted on a non finished mill, HTD5, no backlash at all. But i am using belts and pulleys yanked out of old machines.


I think you're right: I already have some AT5 pulleys, bought from Technobots Ltd in 2013, and I also realised I have an HDT5 setup (just not the size I need) bought quite recently from Agrolager. I did some testing: I clamped one pulley in a vice, made a mark on the belt with a permanent pen, and then held the other pulley in my hand, tensioned the belt and felt/watched for any backlash. I did this with both the AT5 setup and with the HTD5.

The result: I can see and feel some backlash with the AT5, but nothing at all with the HTD5! These are taperlock HTD5's from Agrolager . Both types have much less backlash than the transmission in Muzzer's video. I can see the AT5 belt slide a few tenths of a mm, maybe 0.5 mm at most.

I think I'll order the right size HTD5 from Agrolager then as well as another set of AT5's, just to see if the ones they've got are better than the old Technobot ones. Guess I need a new belt too.
The following user(s) said Thank You: tommylight

.... for european production .... incredibly many taper locks are still produced in europe .... in italy, romania, slovenia, poland .... in germany i don't know but some special types sure yes .....

The keyless shaft locks are pretty tolerant of pulley bore diameter variations.  If you can manage the space, the flanged versions will help keep the pulley very square to the shaft.

My suggestion is to do the boring with a 4-jaw chuck.  The outer rim and hub (if present) are not likely to be perfectly concentric with the bore (and pitch diameter).  Use an arbor in the bore to indicate angular runout (or indicate the bore along the whole length).

While you're at it, take a skim cut along one face for the shaft lock flange to register against - or at least to help during installation when checking pulley alignment.

Whichever tooth profile you select you can reduce backlash if you find it's a genuine problem.  The trick is to get the pulley hard anodized and specify an OD growth value.  i.e. Type 3 hard-coat anodize, 0.004"  should result in a penetration of 0.002" and growth of 0.002" on the external surfaces.

This would be a serious problem if you had a perfect bore fit (or set screws), but the keyless shaft lock lets you get away with making the pulley teeth larger/wider and not caring about a couple 'thou on the bore.

Another method is to fix the driving and driven pulleys and use an idler to tension the belt.  If the idler is on the back side of the belt you get more teeth engaged which helps reduce backlash.  Just be cautious of idler diameter; belt mfgrs publish minimum idler (and pulley) diameters for back-bending arrangements.

Less More
02 Feb 2022 16:30 #233812 by arvidb
Replied by arvidb on topic Taperlock HTD -vs- AT5 with setscrew
I got the new pulleys a while ago and have now had time to do some experimentation. Here are the two 22-AT5 pulleys; the closest one is the one from Agrolager and the further the one from Technobots: 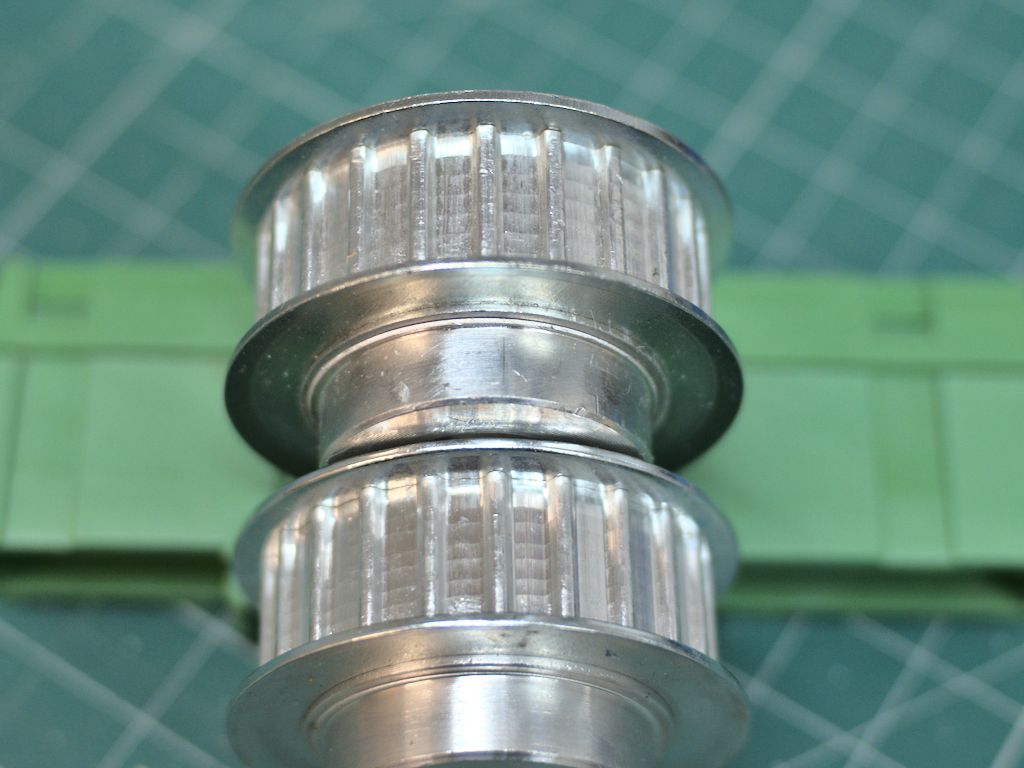 TL;DR: Not all AT5 pulleys are made equal and some's got a lot of backlash! Buy a single set and test for backlash before going all in from any particular seller.


I'm now using the taperlock HTD pulleys instead, and they work nicely. However, they are comparatively huge! The smallest taperlock HTD 5M pulley from Agrolager is 36 teeth. This thing weighs 335 g (incl bushing) and has an outside diameter of about 56 mm. This means the complete gear system (two pulleys) has an inertia of about 2.5 kg·cm^2. My servo rotor inertia is 0.26 kg·cm^2 and the rest of the axis (20 kg travelling mass and an ~800 mm long, D=19 mm ball screw) has an equivalent inertia of <0.75 kg·cm^2. So changing to the HTD taperlock system changes the inertia ratio from <3:1 to about 12:1!

This is still within the servo's capability for the accelerations I want to use, but it makes life much harder for the servo - before, the dimensioning torque was due to cutting forces (I aim for 1000 N). With the taperlock pulleys, it is instead due to acceleration torque. Not to mention it requres a completely different tuning! (Luckily my Omron servo's have settings for inertia ratio so I can change only that rather than having to retune the system, but I got some interesting sinusoidal oscillations before changing this.

I made this LibreOffice Calc spreadsheet to calculate e.g. inertia ratio:


It's based on this Servotak calculator , but with a corrected inertia ratio calculation (they seem to consider the gearbox part of the motor which is... strange to me?).

Less More
03 Feb 2022 17:44 #233894 by Muzzer
Replied by Muzzer on topic Taperlock HTD -vs- AT5 with setscrew
If you look at the dimensioned drawings for the pulley tooth profile and measure what you are being supplied, I think you will find they are quite different - they certainly look it from here. You could measure and compare the matching belt and pulley features to get an idea.

Most of these pullies are machined from long lengths of Chinese pulley stock, so it seems you will find the same issue no matter where you look. Sorry I don't have the drawings to hand but I ended up making my own pullies in the end, as it seemed to be the only sensible solution in my situation.

An HTD5 pulley can take a massive torque and I suspect many applications are way overspecified. Also, on my systems, the MoI of the ballscrews far outweigh the MoI of the pullies.


1) AT profile was developed by, and is proprietary to Brecoflex, and they never published a standard, or technical specs to make belts or pullies to.
2) Brecoflex had a partnership or joint venture with Mectrol to manufacture belts and/or pullies, and as such, Mectrol had a full set of technical specs.
3) The arrangement between Brecoflex and Mectrol ended, and Mectrol was able to retain the internal technical specs, and they started making their own belts and pullies.
4) Mectrol was then purchased by Gates, and that is how Gates obtained the AT profile.


Looking at Brecoflex' homepage there seems to be three different "Tooth Gap Designs" for AT5: Normal backlash, Reduced backlash "SE", and Zero backlash "0". And here I was thinking that the whole idea of AT5 was "no backlash"!

The above notwithstanding, there is an international standard for the tooth profiles of T and AT belts and pulleys: ISO 17396. I haven't been able to find any complete "gratis" version online to see if Brecoflex' Tooth Gap Design variations are part of the standard. This 11-page preview was the best I could find, but it doesn't cover the pulleys.

For my specific situation, if I want lower moment of inertia I could go with a 28T keyed fixed hub pulley on the motor side and a 36T taperlock pulley on the ball screw (instead of my current 36T+44T all taperlock). That would halve the inertia, approximately. But I don't think it will be necessary.