Less More
05 Mar 2016 10:33 #71079 by verticalperformance
Replied by verticalperformance on topic Sherline Lathe Conversion ?
Haven't been keeping up with the forum lately - but find attached some pics of my sherline lathe spindle encoder.
I used the original sherline tacho encoder for the index pulse, and created my own 60 slotted disk for the RPM, and the optical interupter is a honeywell HOA2001. Might not be available anymore, had it lying around from 1984

Spindle speed controller is a DigiSpeed-SL™ DC-04 from Homann Designs.
Stepper controller is standard sherline, and all of the extra electronics are squeezed into that. 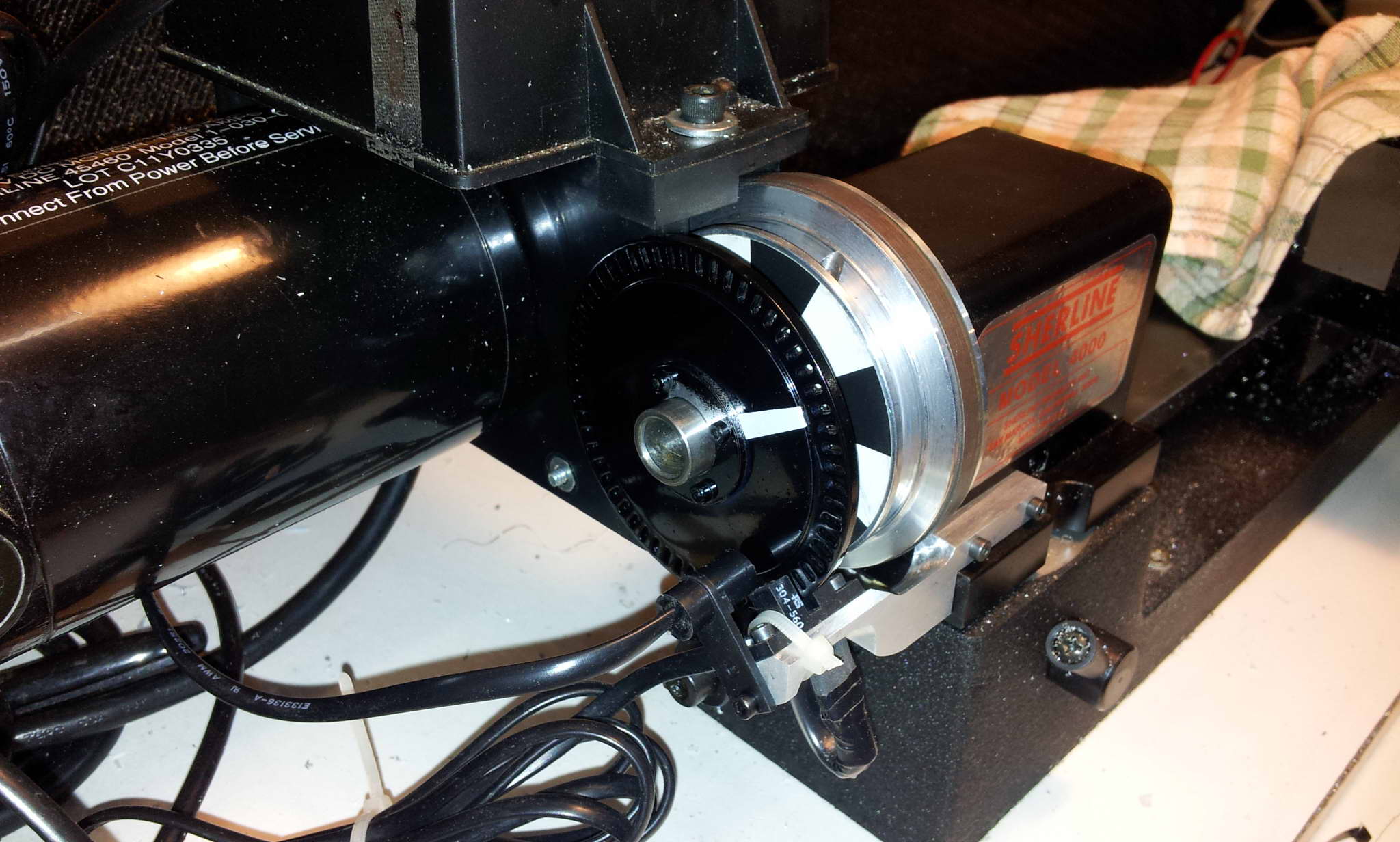 Works well, cuts threads within the limitations of the sherline anyway. If you ever have your chance again - get the long bed one next time!

Zipped up some drawings if of any use to someone else - your chinese encoder is probably far superior. But will be fun to mount!

I've been on the road for the last two months so couldn't reply till now. Thanks for the info. The drawings won't help much if I go with the encoder, but will likely help others. I like your solution, it looks very clean and functional.

The info on the Holman speed controller may be useful. I think the Gecko G540 may have outputs that can be wired directly into the Sherline motor controller. I haven't tried it so I'm not yet sure. If that doesn't work I'll be looking for a solution like the Holman.

No recent progress due to travels. I hope to get back to mounting the encoder soon, but have a couple of short trips coming up and more project than I can remember.

Less More
20 Aug 2016 08:05 #79120 by Contract_Pilot
Replied by Contract_Pilot on topic Sherline Lathe Conversion ?
I have 2 Sherline machines sitting in the closet... One day I will get to making a controller for them.

Contract_Pilot wrote:
I have 2 Sherline machines sitting in the closet... One day I will get to making a controller for them.


Looks like both of those have been previously set up for CNC. Does the lathe have an encoder mounted? Since the hardware is there it shouldn't take too much to get them working. The Gecko I used above works well. You could share a controller between the two.

I'm just trying to find the time to complete the conversion I've started. Some 6 months since I've had time to work on it. Way too much work on our travel trailer and a basement retaining wall. I want to get back to things I can easily lift (Sherline, model engines, etc). Once I get the encoder mounted I'll start trying to figure out a set-up for LinuxCNC. That's where I'll need help if I can just get to that point.

Thanks for the note.

Less More
26 Jan 2017 17:20 #86720 by currinh
Replied by currinh on topic Sherline Lathe Conversion ?
It's been way too long since I've worked on my Sherline conversion. Several project have taken way longer than I thought they would. But I've recently made some progress.

As above I obtained a Chinese encoder for the Sherline Lathe. I've designed a mounting system for it as below. 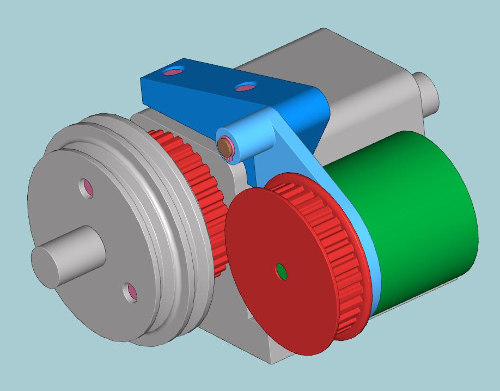 A timing belt is used to connect the spindle and encoder. These seem large for the job but needed to fit over the compression nut on the Sherline and allow enough space for the bolt circle. It seemed easier to mount the encoder off the spindle housing and put the spindle timing sprocket inboard of the drive sheave, design trade-off. A block is bolted to the spindle housing for mounting, two tapped holes into this housing. The encoder mount itself pivots on this block. A 1/4-28 screw at the bottom of the pivoting mount is used to tension the belt though it's not visible above. A spacer is used to move the Sherline motor to align with the new sheave position. Simple enough be it takes me too long to work out the details. The lathe with the encoder mounted is below.

Here are a couple of close ups of the encoder mounting. In the first you can see the tension adjustment screw. 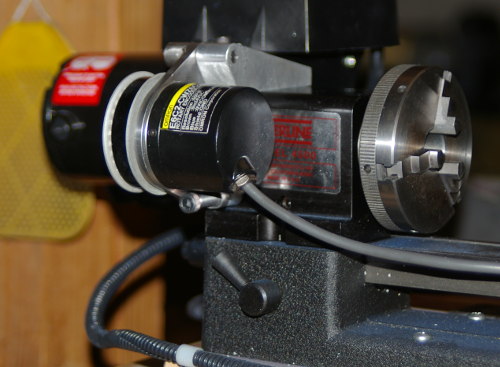 In the last picture you can see an errant bolt circle. I was optimistic with the feed rate in drilling the first and broke a drill off. I just rotate the sheave 60deg, set speed over-ride to 33% and tried again.

I have drawings for the mount if anyone is interested.

currinh wrote:
In the last picture you can see an errant bolt circle. I was optimistic with the feed rate in drilling the first and broke a drill off.


You could glue on some screw heads to hide the fact. Not that I have ever done that, Oh no

currinh wrote:
In the last picture you can see an errant bolt circle. I was optimistic with the feed rate in drilling the first and broke a drill off.


You could glue on some screw heads to hide the fact. Not that I have ever done that, Oh no

Less More
27 Jan 2017 00:45 #86751 by currinh
Replied by currinh on topic Sherline Lathe Conversion ?
OK, OK. I printed out some screw heads but they didn't look realistic enough. I figured they'd peal off with coolant flying around anyway. Likely wait till I have a 3D printer and make some. You didn't mean cut off some real screw heads did you?

Well, I have the encoder mounted so I had to temporarily wire it up and see if it works. The temporary wiring is a little scary, so if you are squimish please look forward past the next picture. 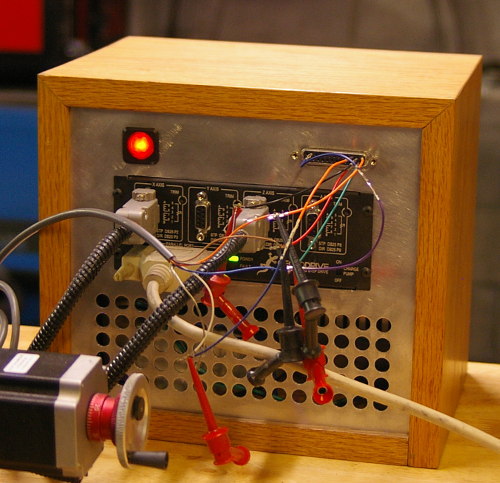 This supplies 5v to the encoder with the ground tied to the G540 ground. The signal wires go right into the G540 which goes some pull up/pull down magic. Don't know but it worked with the photo sensor I tried earlier. (really I worked it out before ordering the encoder.)

By chance I noticed that the Stepper Wizard included encoder pins Index, A and B! On the off chance it would work I added encoder Index, A & B signals to Stepper Wizard. I used HAL Meter to look at the encoder signals. I found encoder.0.position which seems to be a running total of encoder counts as full revolutions. Joy was everywhere as it incremented 1.0 each spindle revolution. Life was good. Turning the spindle backwards decreased the revolution count also, so the quadrature encoder is working and being fed into software. Life is great.

The Stepper Wizard also put a spindle speedometer on the Axis display. It worked and shows what seems to be the right speed. 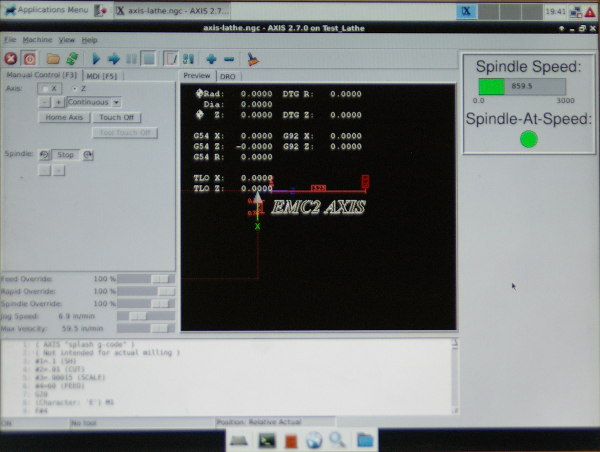 The Spindle at Speed light seems to always be on. That's OK for now.

Finally, I tried to run a G33 command. This didn't work right off. After some time in wonderment I found you have to take the spindle out of "stop" even though there is no spindle speed control yet implemented. After this revelation G33 seems to work as advertised at least cutting air. I can slow and speed up the spindle during a G33 and the axis speed seems to follow along. However, if I stop the spindle during the command and reverse it by hand the axis doesn't reverse. Not sure why, maybe G33 doesn't use the full quadrature encoder? But turning the spindle backwards doesn't advance the axis, it just doesn't move. So the software is recognizing forward and reverse spindle directions.

But it does work, it is a miracle. My sincere thanks to those involved in developing the Stepper Wizard.

Less More
27 Jan 2017 03:16 #86760 by currinh
Replied by currinh on topic Sherline Lathe Conversion ?
OK, one more post for tonight. Just for grins I cut a short length of AL to .250" for threading. Then, in radius mode, typed in the following threading command:

Which, in a perfect world, should create at 1/4-20 thread. I put together a UTube video of the results.

You'll note I was so mesmerized, that it was working, I got around to adding more cutting fluid just after the last pass. With AL it came out to be a clean thread despite this. And it fit!

Next will likely be trying to break into the Sherline speed control box to implement LinuxCNC spindle speed control. But right now off to a few other projects.

Thanks for your help so far.

Less More
27 Jan 2017 13:03 #86774 by andypugh
Replied by andypugh on topic Sherline Lathe Conversion ?
I just realised that this is something that a Sherline can't normally do, as there is no leadscrew clasp-nut.
The Sherline thread cutting accessory requires you to turn the spindle by hand.