I could probably fit a 12mm ballscrew in there, theres a 12.7 hole through the cross slide, but the nut would be the problem. I could buy the ballscrew cncmyford sells but that comes out at A$460.00 so thats not really an option.

I could also initially use a trapezoidal acme screw in either 10-2 or 12-4 as a starter but backlash might be the issue there. I'll see if I can get some anti-backlash nuts for them, maybe dumpsterCNC has some.

The Z axis is relatively easy, 16mm ballscrew is a goer, its just all the mounting plates to create.

I might have to put the machine back together again to make some adaptors for the cross slide bit, thats after I sort out a ball nut I can use.
Last edit: 29 Jan 2017 05:57 by racedirector. 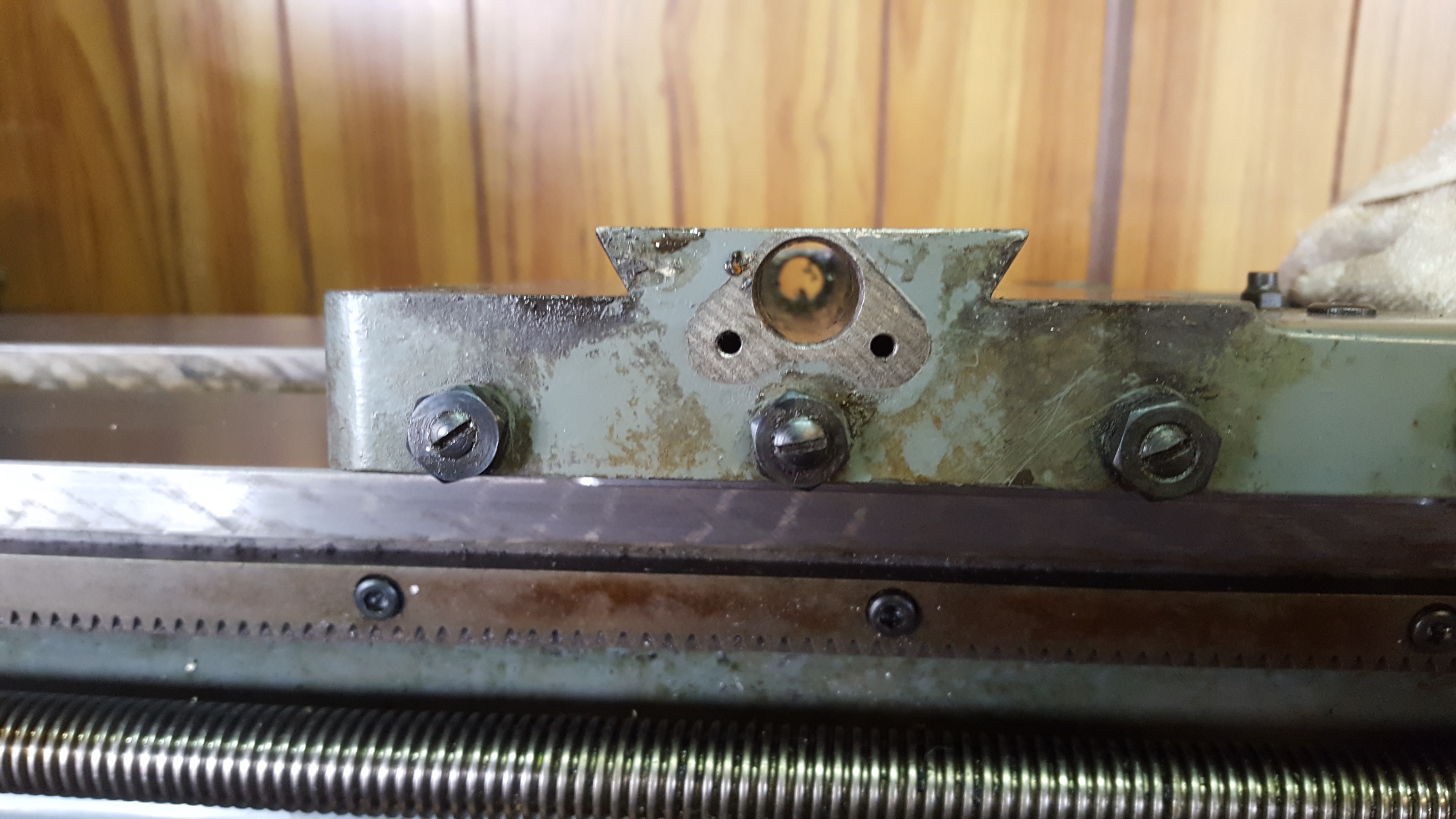 Saddle with Cross Slide attached.... not a lot of room there.... 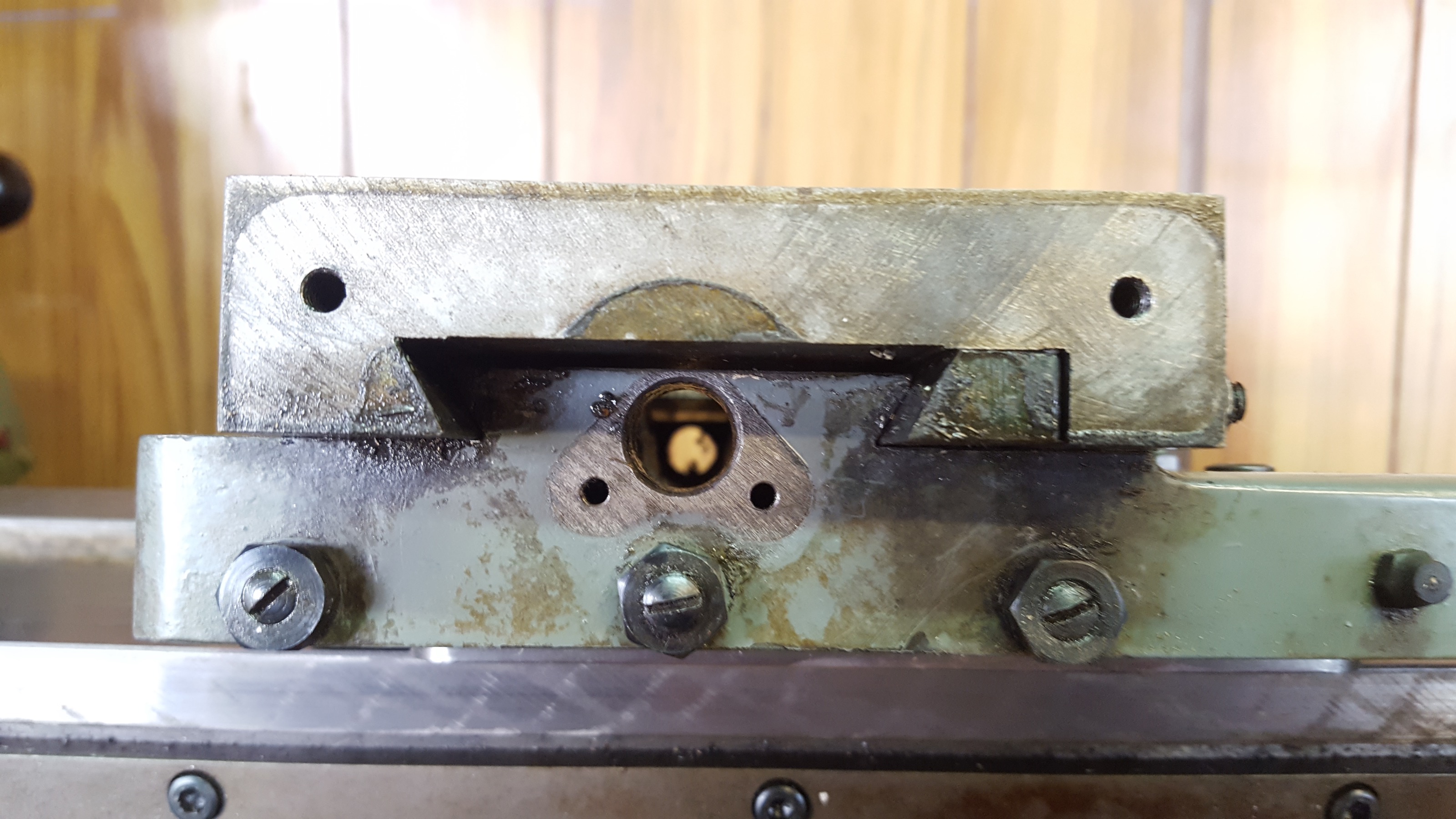 I checked out DumpsterCNC and they do have anti-backlash nuts available to 10-2 and 12-3 trapezoidal acme rod, might just go that way for now until I can work out the ballscrew option....

Could you make a standoff so you could move the nut away from the dovetail?

Less More
29 Jan 2017 07:30 - 29 Jan 2017 07:31 #86886 by racedirector
Replied by racedirector on topic Myford Super 7 Lathe CNC Conversion anyone?
Thanks Rod, been banging my head against the wall trying to get damn alibaba to play ball with 10mm ballscrews, nice find there. Funny how the small stuff is way more expensive than the bugger stuff!

And yes, will have to make a standoff to attach the ballscrew nut to, the inside thread bit will be the tricky bit for a novice lathe user

racedirector wrote:
Thanks Rod, been banging my head against the wall trying to get damn alibaba to play ball with 10mm ballscrews, nice find there. Funny how the small stuff is way more expensive than the bugger stuff!

And yes, will have to make a standoff to attach the ballscrew nut to, the inside thread bit will be the tricky bit for a novice lathe user

You'll be amazed once you get it done! I'm all self taught in my home shop over the last few years. With what I've done to build my plasma machine, I think I can build almost anything I choose to now.

Less More
29 Jan 2017 09:20 #86888 by racedirector
Replied by racedirector on topic Myford Super 7 Lathe CNC Conversion anyone?
Oops, the inside thread of the nut standoff. The nut would be a R1003T3-RSK which is a round nut with a threaded section (M18-1), the standoff would need a hole in it with a thread to accept the nut. I could simply bore the hole to 17mm and then buy an M18-1 tap and do it by hand I suppose.

You're not wrong about the satisfaction of doing things like this, felt the same way when I built my Mechmate router.

You might need to be creative with a 2 part standoff if the mounting holes on the lathe clash with those on the nut. Maybe there is a part that attaches to the lathe using cap screws in counterbored holes. Then a plate for the ball nut to mount to that has a turned boss to locate it in the bore.

Seeing you have a lathe, this is an easy and sturdy way to mount a stepper

Your nut would attach to the plate at the Rotary table end.

The standoffs have a tapped hole at the stepper end and a male thread at the RT end. You can align the stepper by adjusting how deep the threads are engaged... No need to use hex rod, thats what I had.

racedirector wrote:
So I have disassembled the apron and cross slide only to find that the cross slide has stuff all room for a ballscrew.


This is a common problem.
I used to have photos on cnczone of how I got round that with my mini-lathe, but they disappeared when they pulled the plug on Picasa.
However, thinking about it, it might not be that relevant anyway, as the mini-lathe has the nut on the cross-slide, and the Myford has it on the saddle.

It is possible that a rotating-nut arrangement might help. As the Myford moves the screw and not the nut, this might make getting the drive in easier. But I suspect that there basically isn't room.

Depending on how much space there is between the lathe and the wall, I think I would be looking to mount the motor round the back, driving the end of an extended screw with a belt drive. T2.5 and T5 belts have effectively zero backlash, and let you wrap the drive round itself for compactness. Even if you don't do this, a belt drive will take up less axial space than couplings.
whether you but the thrust bearings in the front side or back side would be a matter of taste. I think I would use the front side, where the handle is, but I don't have a Myford to look at to decide.

The best nut-diameter to screw-diameter ratio seems to be the RSH1605 nut, which is 1" diamter and takes a 16mm screw. However it has a surprise, there is an external ball return tube not shown in the catalogue.
Here is how I got round that with my mill

I used the same nut on my lathe, but have more space than you.

The only nut that will fit down the existing hole in the saddle is for a 6mm screw, and that probably isn't worth considering.
However, my Mini lathe ran for years with an 8mm ballscrew and it never gave any trouble. So you could consider that.
(When I say "Mini Lathe" it was a 9 x 30 lathe, about the same size machine as a long-bed Myford, but made with half the metal)

How much space do you have between the centre of the saddle hole and the underside of the cross-slide?

The right answer might be a complete new saddle casting, with space for a ballscrew and built-in mounts for the Z-nut. With the Myford bed design this isn't beyond the realms of possibility (It would be rather more of a challenge with an inverted-V bed)

rodw wrote:
Seeing you have a lathe, this is an easy and sturdy way to mount a stepper


And this is a not-easy but much-shorter way to do the same thing (seeing as I was on CNC zone looking for other old pictures)
www.cnczone.com/forums/uncategorised-met...ines/172314-cnc.html

(The machining in the video was done with the lathe with the 8mm cross-slide screw, to keep it relevant to this thread)

My original thought patterns were based on what cncmyford had done, his outcome, I think, was to make it all look like original. For the X he moves the cross slide and the motor (and everything else) mainly due to locking the nut onto the saddle.

I can safely get a 10 or 12mm ballscrew into the saddle with a little massaging of the holes through it. From what I have seen the 10mm offers a purely round ball nut in either 2mm or 4mm lead as linked by Rod. Since Rod posted re the nut I have found tons of 10mm ballscrews available from China. The 12mm screw would be better but the nuts are the problem, that is a problem of attaching it to the saddle. If I could somehow attach it to the cross slide instead I could have a "fixed" screw much like a router and that would keep the moving weight down (not having to move the motor etc as well).

I just measured the distance you asked for, it is 10mm from the hole centre to bottom of the cross slide. In my second photo there are 2 bolt holes, these are used to mount the original screw extension and the hand wheel. Thoughts running through my head as to make a mount for a ball nut that hangs from these 2 holes with the larger end of the nut facing away from the slide. In the pic the slide is pretty much at full travel towards the back of the lathe. My only problem after mounting the nut in this way would be mounting the screw, I could possible mount it off the saddle in some way based around the same bolts that will hold the Z nut mount.

If I can get a 12mm nut small enough this might be the way to do it.

What I might do is buy some cheap trapezoidal screws and nuts and have a play to see what I can fit and how I can fit it. I don't care if it fits within the "look" of the Super 7, it just needs to work.
Last edit: 30 Jan 2017 08:40 by racedirector.