I've been taking a break for a bit from my home remolding project to tinker with PP2. Overall graphically the same but a lot of improvements under the hood.

So tackling this has been more painful than I remember from PP1.

Being limited without the use of halshow and halmeter has made this even more of a challenge. PP2 uses a "repo" of locally installed linuxcnc [master] as a source for development; but then of course its disabled/removed functionality on the release. Hence the portable Path Pilot 2 software that we receive ; only chosen binary's / scripts ship with the release.

I have figured out how to git pull linuxcnc master then configure it for use on a PathPilot 2 machine. If there is enough interest I will try to find the time for a proper how-to.

So basically here is what you do;

1) git pull linuxcnc into a folder named [linuxcnc] (of-course without the brackets.)
2) follow build instructions for a RIP; configure ; (dependency's are already met; set for uspace ... ect.)
3) I did NOT complete setuid
4) I did NOT set a RIP environment using the script.
5) move or copy the entirety of the linuxcnc folder [the one you just created and git pulled linuxcnc into] to
[folder structure should look like this when completed, you will have to make the folder structure]

There are a few things here that can go wrong. First the master you git pulled; is different than the development build they used. I'm not sure of the date/commit they used [OCT 2017??]. The first problem is I had - was basically a file mismatch/newer and PP2 crashed.

I just renamed the linuxcnc folder to something else for the pp2 lauch [linuxcnc_repo]. After pp2 lauched I renamed linuxcnc_repo folder back to the original name linuxcnc. I renamed to prevent the scripting from trying to load from the folder [scripting looks for this "repo" - It will launch without just as originally shipped.

Executed halshow/halcmd/halcompile from the recently built linuxcnc folder. I can now build modules ect while making this thing easier.

The naming scheme is important because this is where all the scripting looks for linuxcnc components that are not in the portable release.

I will keep tinkering with pp2 until I figure it out.

I have no idea YET of what other things that can go wrong with this. But for now it will allow me to see all pins / names of components and I can do it much easier.


So am I behind progress and someone else has already figured this out? Is there an easier way i'm not tracking? 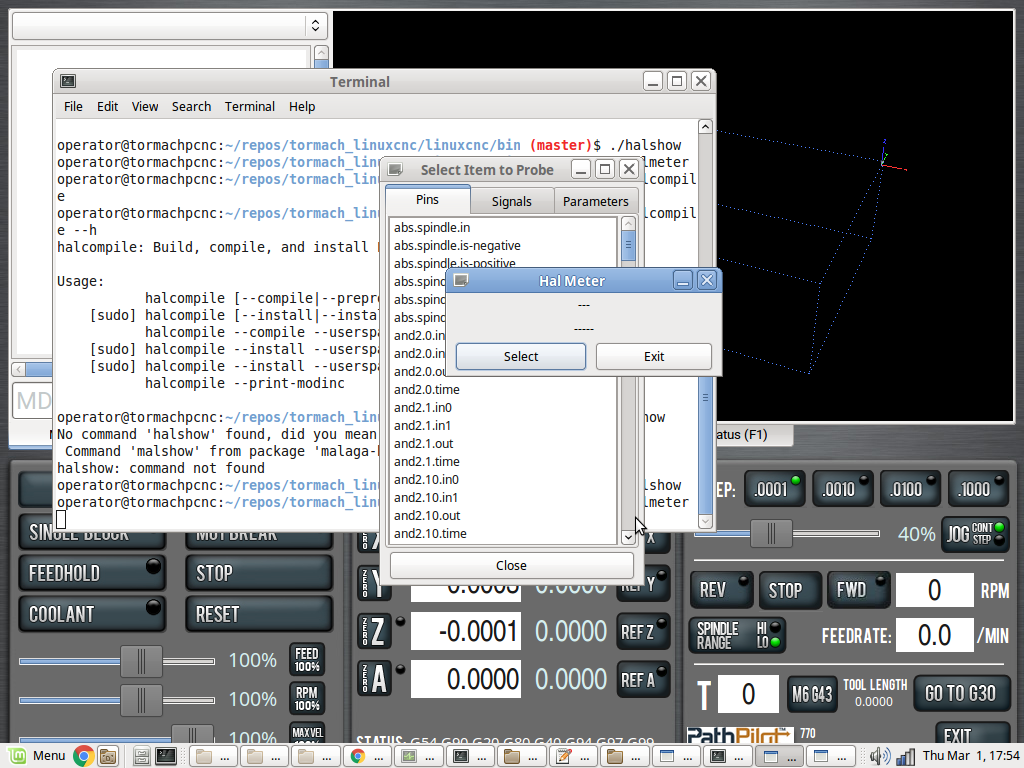 Less More
02 Mar 2018 01:55 #106832 by sharmstr
Replied by sharmstr on topic PathPilot 2 How to use/enable FULL LinuxCNC capabilities.
You have to send a request to Tormach. Try This email address is being protected from spambots. You need JavaScript enabled to view it..

With PP being my first taste of linuxcnc, I had no idea how much they had locked down / not included. I've been struggling to figure out how to do things found in posts here. This helps a ton. Thank you again.

Less More
02 Mar 2018 12:15 #106843 by Clive S
Replied by Clive S on topic PathPilot 2 How to use/enable FULL LinuxCNC capabilities.
I will be following with interest keep up the good work.

Good work. It's great to explore and tinker.

Not trying to discourage you or anything but on a 'un-touched' or 'virgin' copy of PP if you well:

Click on the MDI, type:
ADMIN HALMETER
This brings up the meter.

Type:
ADMIN HALSCOPE
This brings up the scope.

Type:
ADMIN HALCMD <commands>
this issues the HALCMD commands,
You can also have full control over halcmd by stoping PP from loading and load it manually from Terminal then issuing ADMIN HALCMD -KF. This brings up HALCMD on the Terminal for full commands access.

I am releasing a full Pendant with the ability to change DRO float values right through HAL with just few lines addition to original PP code. PP does appear to be closed but its not. They actually can't close much more otherwise they will loose the functionality as well.

I tried this with my full install of pp2 that I recently installed a few days ago from tormach.

I read you could and thought it was strange. It would not work for me so I thought they changed it.

The python source code for the MDI box also have halshow as one of the options, but I never tried it myself. Will check it out.

So you saying ADMIN HALMETER did not work for you?

If you want to see all the commands accepted after ADMIN, check ui_common.py file located in python here: /home/operator//v2.0.1/python
around line 200 in the file.

I also just typed ADMIN in the midi box and looked at available commands in the status text.

I've been getting pretty familiar with that python file I'll check it out tonight.

I did try admin halmeter (and others) as I recall and no it did not work for me. But it is possible that I broke something before I tried; I've been deconstructing path pilot because I want to export the GUI and separate it from PP2.

My understanding is that the images are copy protected tho. So that will have to be redone.

That's how I figured out where the development "repo" is located.

Less More
02 Mar 2018 20:56 #106863 by narrobb
Replied by narrobb on topic PathPilot 2 How to use/enable FULL LinuxCNC capabilities.
admin command on status only shows part of it, they don't show the advance options.

I think you right about the images.

You mean you want to use PP but with different GUI? All the glade files are visible as well, and you can trace them easily and modify. Will be good to have more than one GUI option