The only thing required to make it perfect (to me, at least) is the ability to edit the Gcode on the Axis interface. What would it take to do that?

Less More
13 May 2022 00:46 #242838 by cakeslob
Replied by cakeslob on topic [solved]Axis for 800x480 screen w/ usercommand
Ive tried before with an embedded qt tab, but I could not figure out how to get into edit mode. Ive been looking into it for one made from tk, Im not a computer pro, but the actual text editor part seems pretty basic, I think its all the other behavior that will be hard. I came up with how I think it would work though....which is how I think it works in axis already(im not sure, Ive never set up the gedit), but with it embedded in a tab

>hit edit gcode button
>grabs current loaded file and loads it into editor tab
>do your edits
>save file
>on exit of editor tab, the file is reloaded by axis

HansU wrote:
This looks really great now and should definitely go in master.
I would suggest to add it as a sample configuration for axis.
Cakeslob would you like to commit it yourself, or would you like someone else to do that?


You are too kind. Ill make a sample axis config for it, but not until I figure out which thing is messing up my window size. I can manually resize it smaller, but thats a huge pain on a small screen. I can do the commit when its done, but I know im gonna mess it up.

- show jog speed slider in tab "Manual"
- for a version published on Github I wouldn't drop the slider for max. velocity
- add a horizontal scrollbar for the gcode text widget. The breaking of lines that don't fit the width looks a bit irritating.

Other than that really cool to have it such compact.
The following user(s) said Thank You: Henk 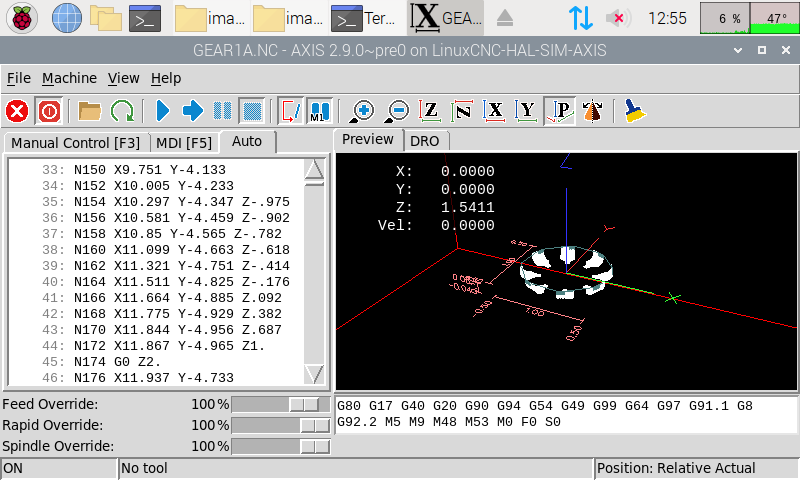 - show jog speed slider in tab "Manual"
- for a version published on Github I wouldn't drop the slider for max. velocity
- add a horizontal scrollbar for the gcode text widget. The breaking of lines that don't fit the width looks a bit irritating.


Jog slider makes sense, it belongs more in manual, Ill see what I can do.

The line breaking is annoying, but its mostly just the title block and linuxcnc style code as they are usually long and the line number indentation adds a bit. normal gcode sans n blocks appears to fit as it should. I will look into it, but i think a second scroll will be equally or more annoying. The fanuc i use at work has a narrow gcode window and its not really an issue once you are past the first 10 lines.

The max vel slider I think I can remove in ini file, but it will default to off. the main reason for that and the gcode scroller is that it needs to fit into a 480 vertical window, and within the x11 window and task bar because its pretty annoying having to force fullscreen. I have a little wiggle room with this new setup so I will see what I can do. But right now it looks like I may be able to fit inside a 640x480 screen so that would be ideal. I may be able to get 1 more slider, and another slider under the modal frame, but we will see.

For normal generated G-code it's no problem with the line length. But this example is a bit hard to read: 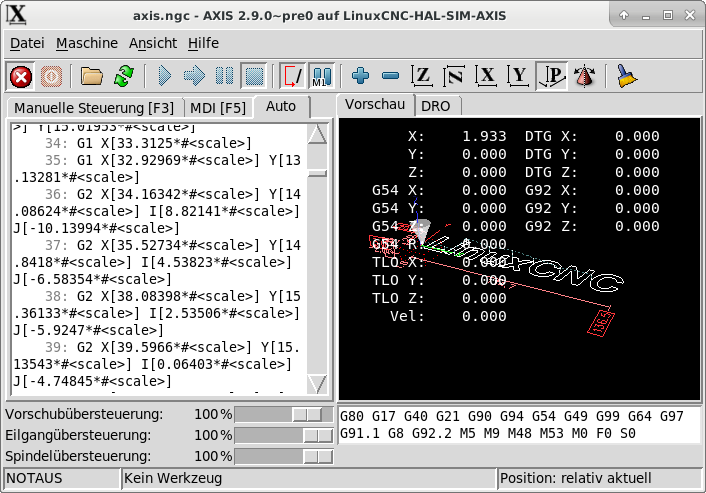 Maybe it is better to not break the line and just don't display the rest of the line.

The Jog slider would perfectly fit into this frame so the other slider don't have to be removed when switching to manual: 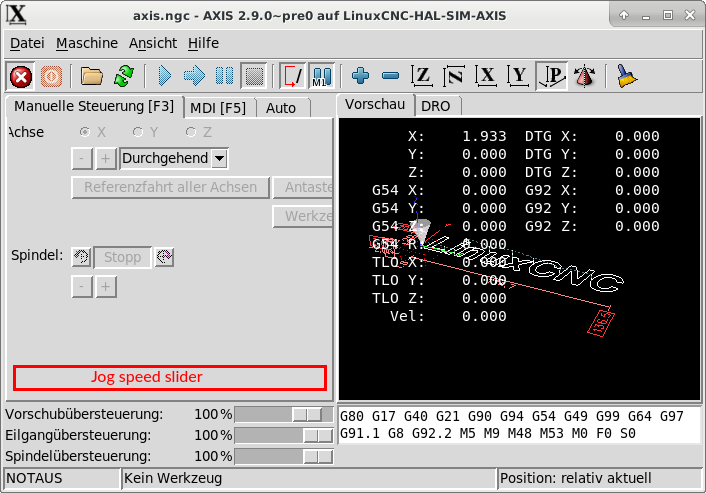 Regarding your plan to add editing of a G-code file inside inside Axis: Maybe that's a general feature that can be added to the Axis source code...

Less More
15 May 2022 19:52 #243048 by cakeslob
Replied by cakeslob on topic [solved]Axis for 800x480 screen w/ usercommand
The plan to add an editor is a long the lines of I also plan to learn python. concepts are still over my head but I am looking into it. Jog one looks good, ill slowly work on that using the new thing I learned from phil.

For the gcode window hmmmm.....

we can make text smaller..., or maybe remove indentation someshow.....

I think I can make the gcode resizeable without changing the window size. I used to do that with my older versions where you could just resize it so its easier to read. it was a little different before but Ill see if I can do it with this new one.