Less More
16 Feb 2022 02:40 #235000 by OT-CNC
Replied by OT-CNC on topic Retrofitting 5 axis Willemin W400 with LinuxCNC
I would still make some press tubes/tools just in case the bearings cool too quickly and something starts binding up.  Basically have a backup plan.
Was the fit loose all the way down the shaft? I would expect maybe a relived area between the upper and lower bearings.

Less More
17 Feb 2022 17:19 #235149 by MrK
Replied by MrK on topic Retrofitting 5 axis Willemin W400 with LinuxCNC
Hi!
The fit on the shaft was quite lose all the way. The bearings won't slide by gravity but I can push them on by hand without any problem.

Actually today was the day. I have now replaced the bearings. I heated up the Boody. Slided in the top bearings and then the nose screw (must be that order). Then slided in the shaft and turned the assembly around. Then the spacer and after some heating slided in the other pair of bearings.

I was very careful to keep everything clean still it almost looks like there is dust particles visible in the photo.... I think (hope) most of it is grease...

The bearings are filled with around 0.64g of grease... I learned that it is alot easier to use a slight excess of grease and then remove the excess for the correct weight when working the grease into the bearings.

I measured the runout with a 0.01mm resolution indicator. Almost no movement. The movement was about half the thickness of the needle. That would be about 0.002mm runout (0.08 thousands of an inch). Well, the indicator maybe isn't made for such small movements... anyhow way better than I expected. 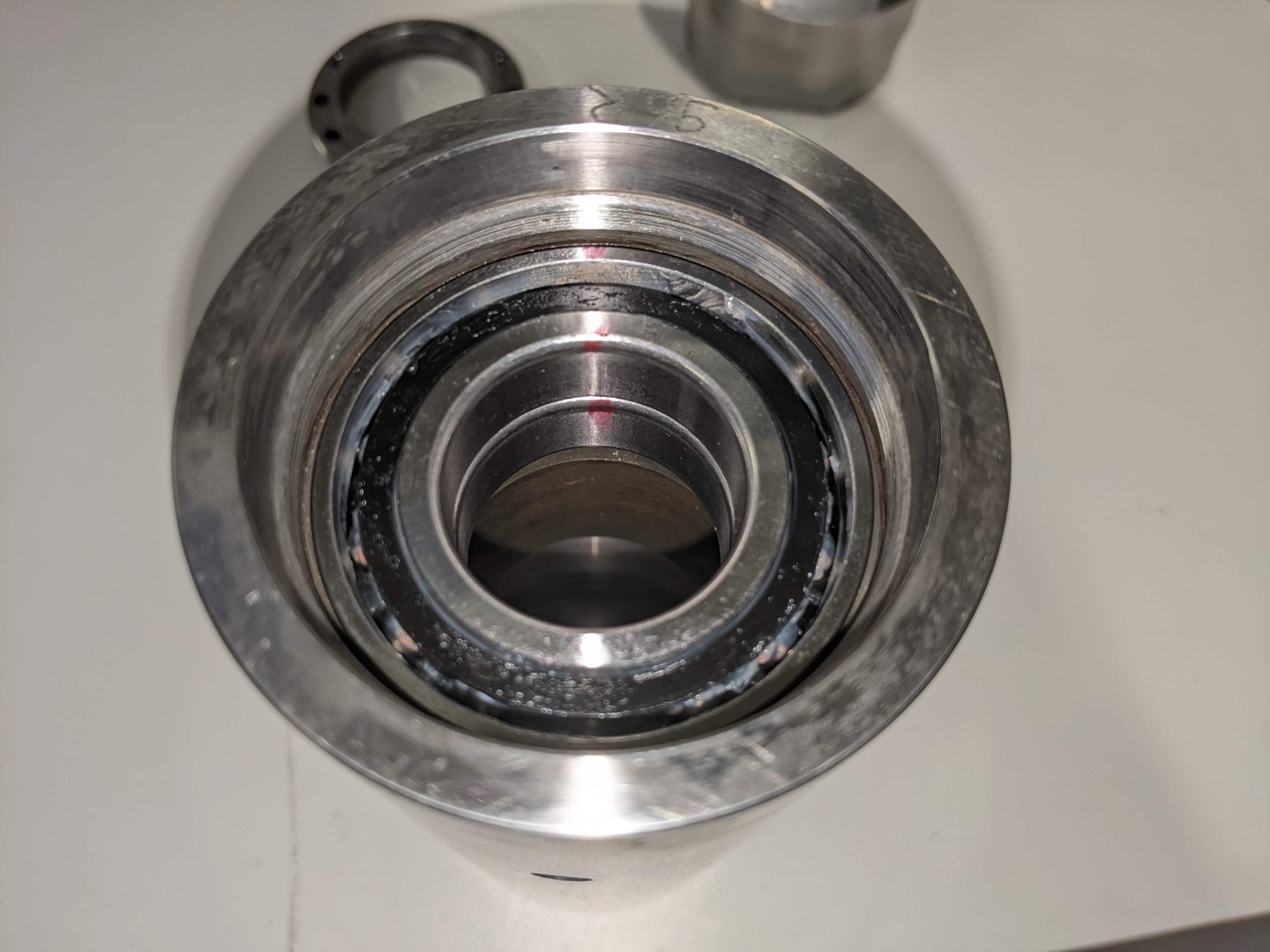 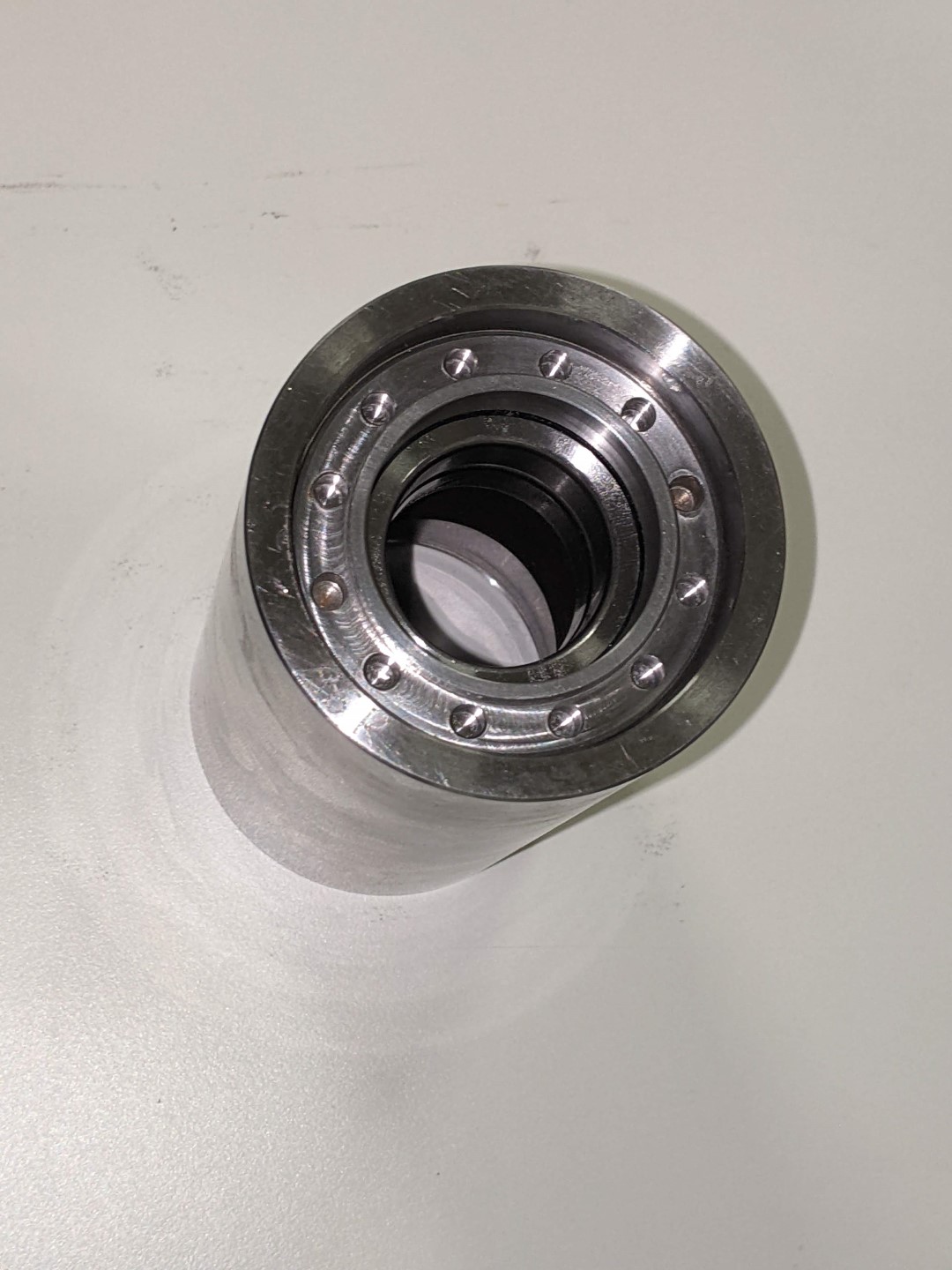 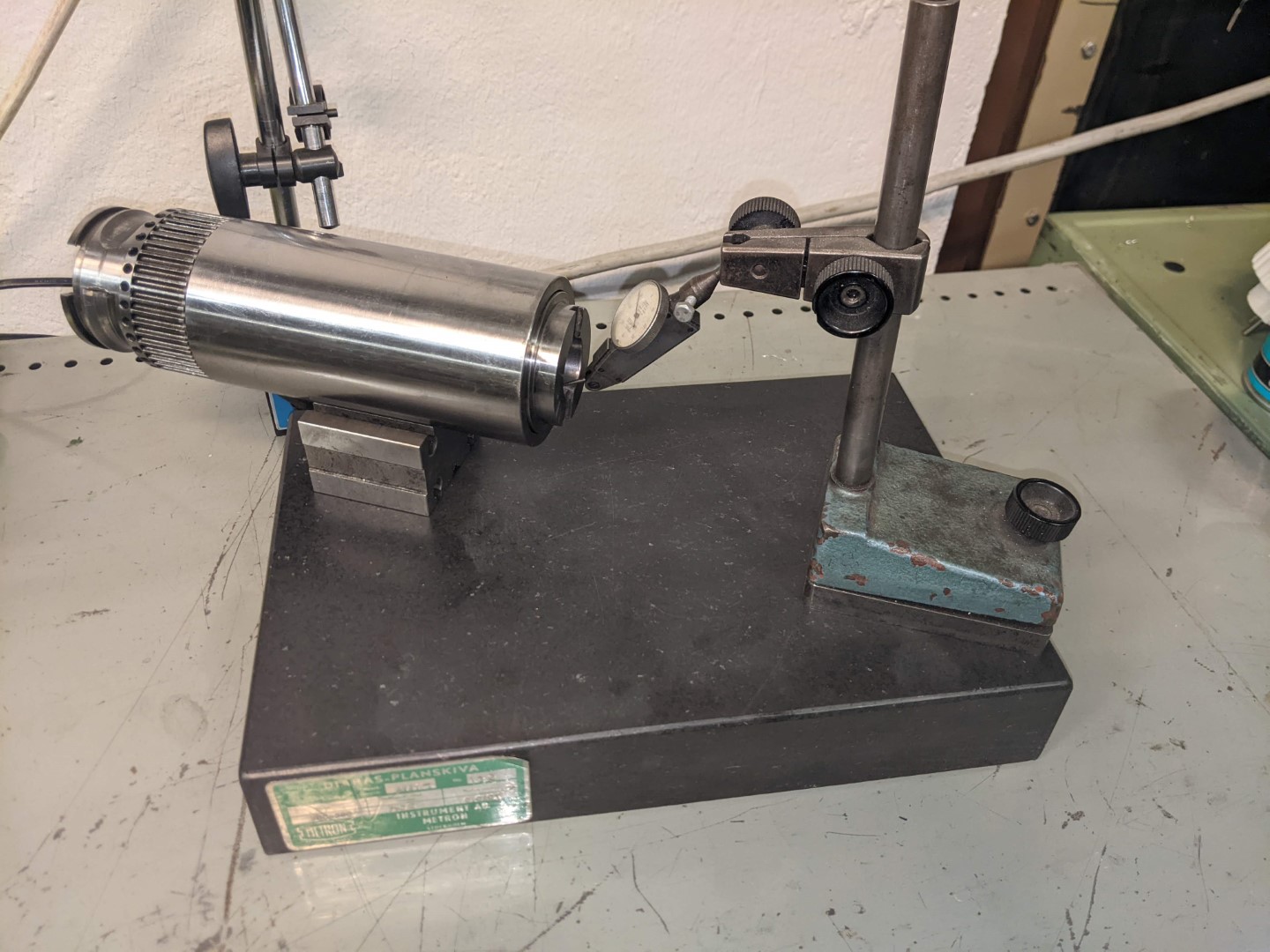 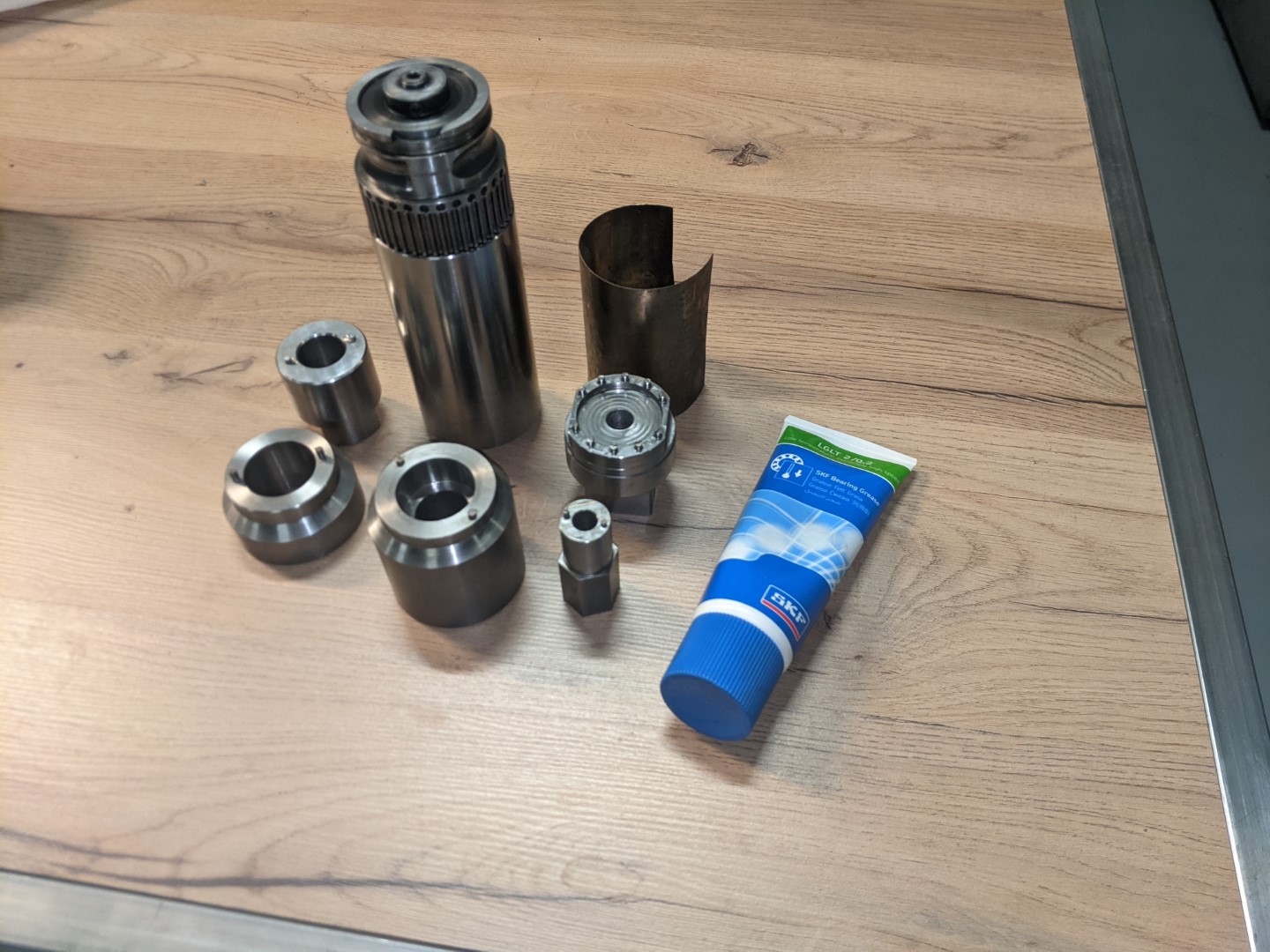 Less More
21 Feb 2022 19:56 #235477 by MrK
Replied by MrK on topic Retrofitting 5 axis Willemin W400 with LinuxCNC
Hi!
So I am now preparing for the spindle to go back into the machine. The spindle is locked in a fixed position (for tool changing) by a pneumatic cylinder. There is a bushing supported by a spring that locks the spindle. This bushing was quite beaten up so I made a new one. I thought about making it in brass to save the spindle from some wear but I had no brass stock at hand so I made it from soft steel. Some pictures of the spindle locking mechanism: 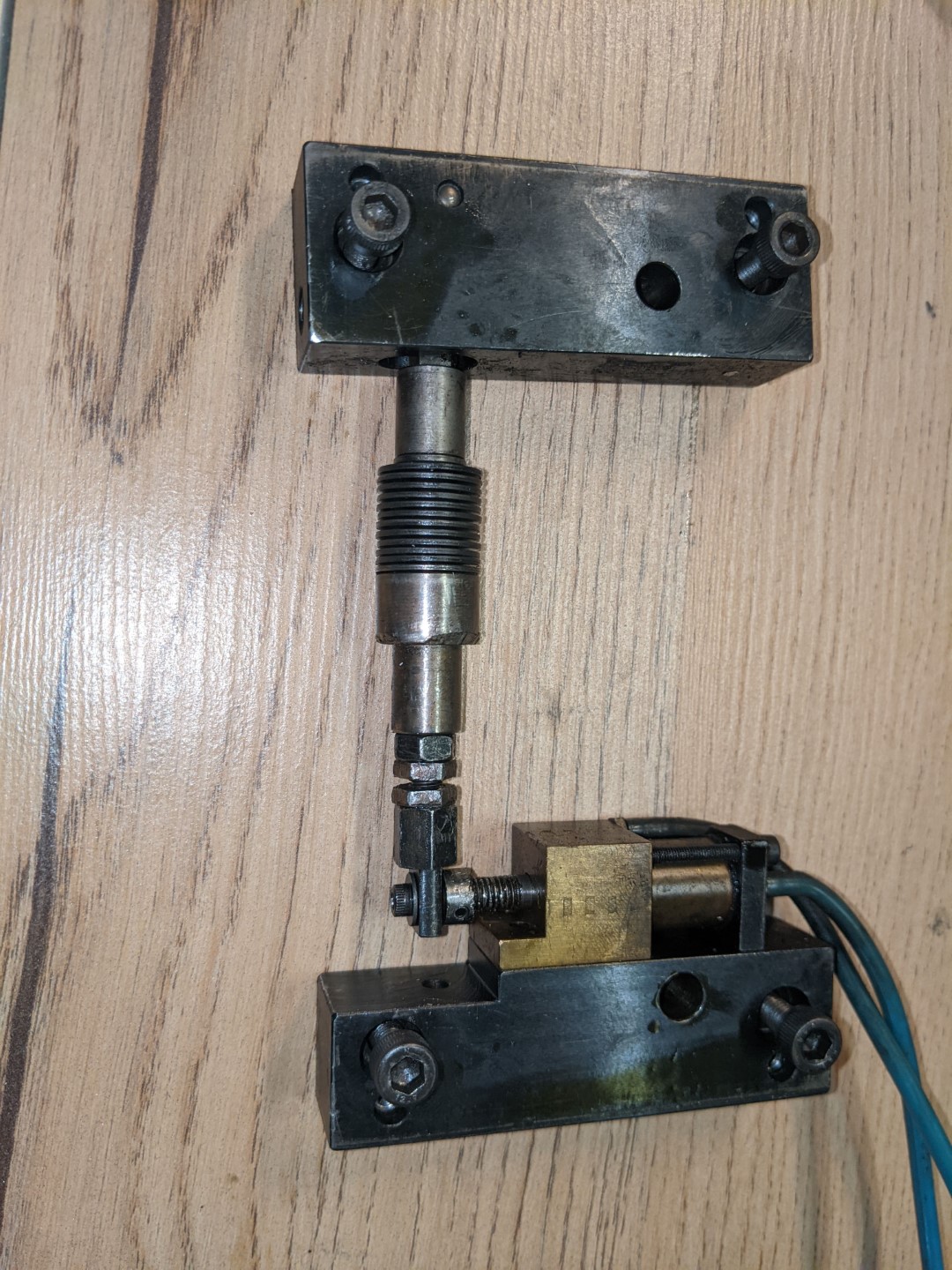 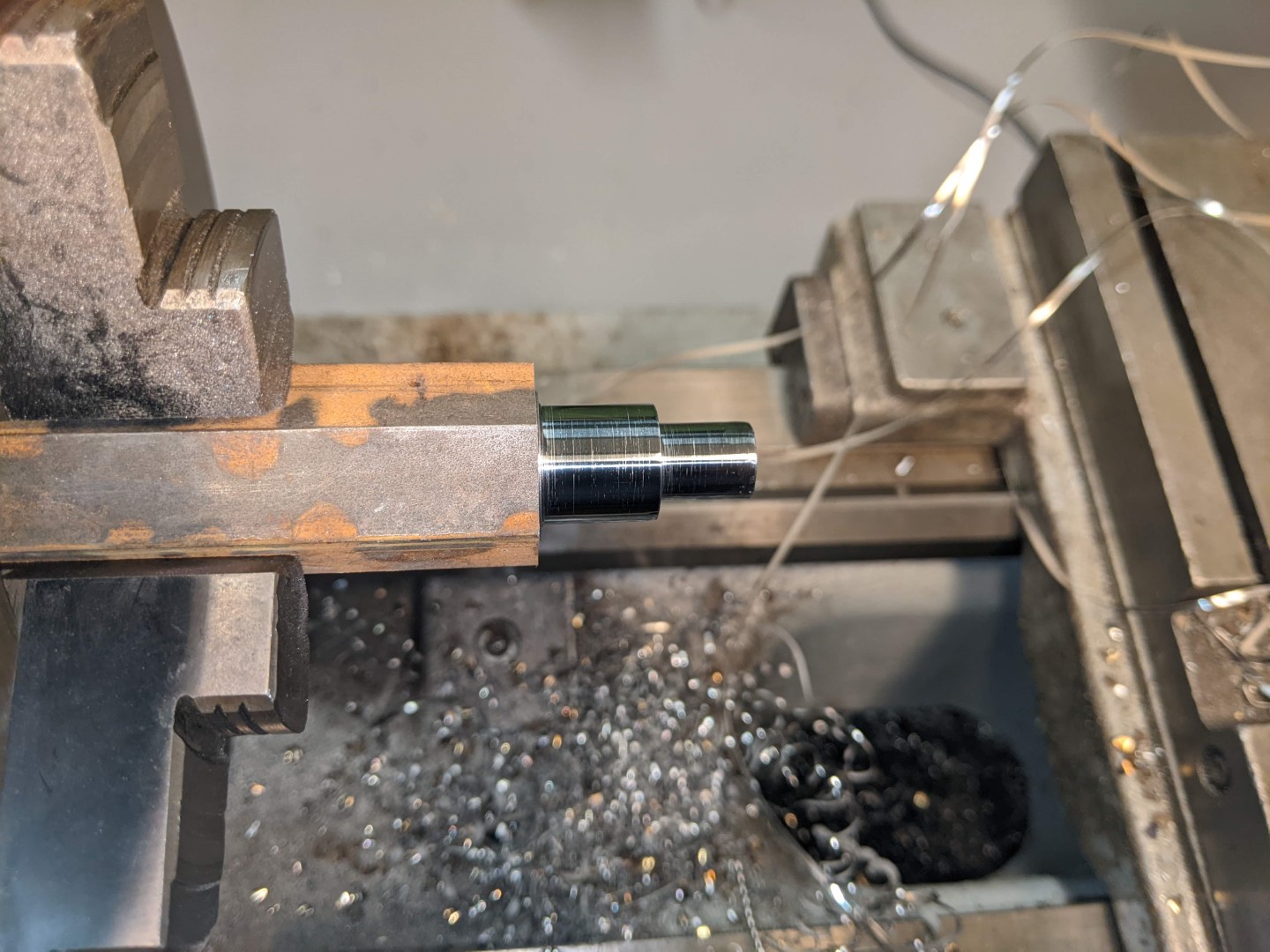 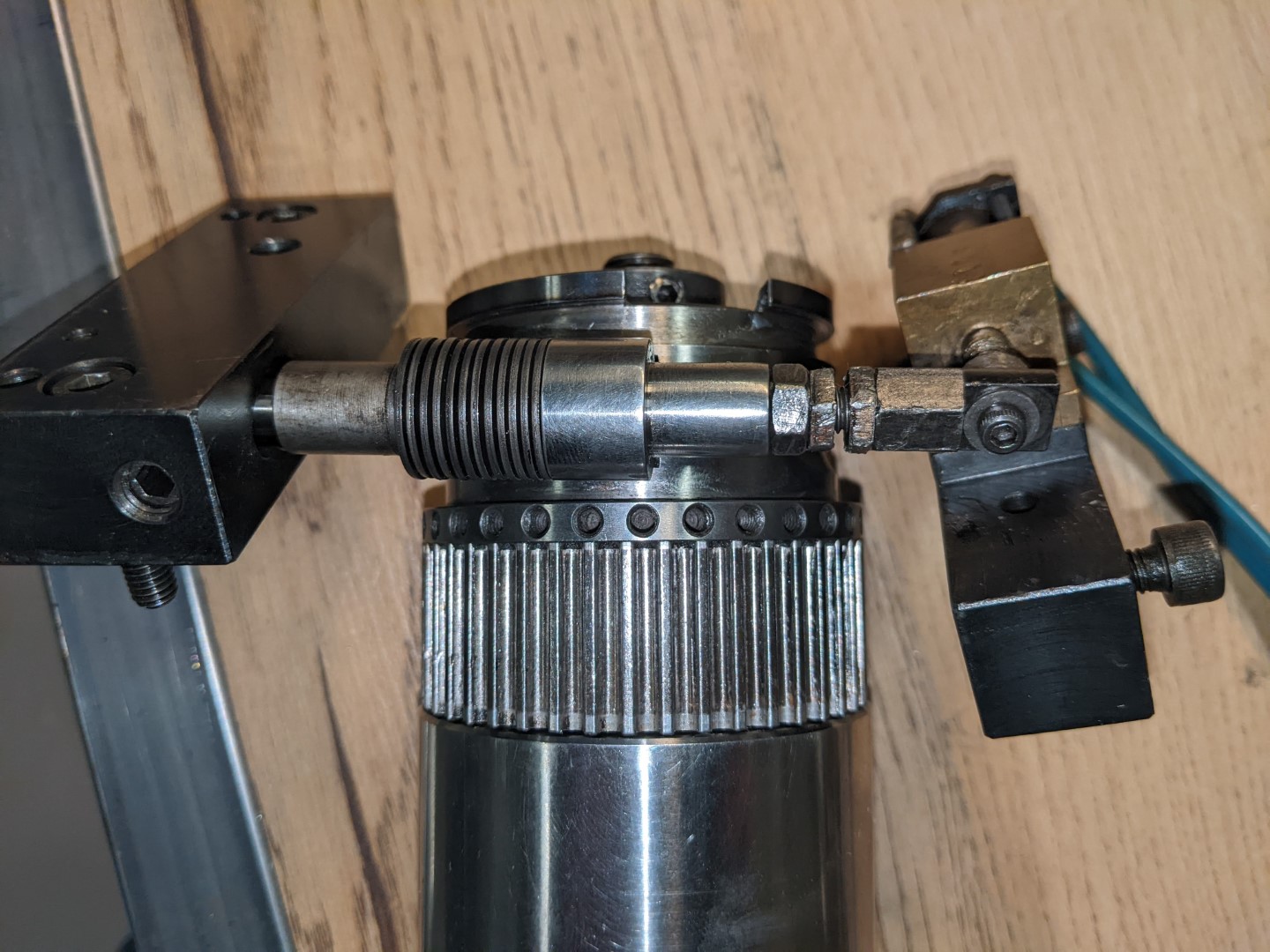 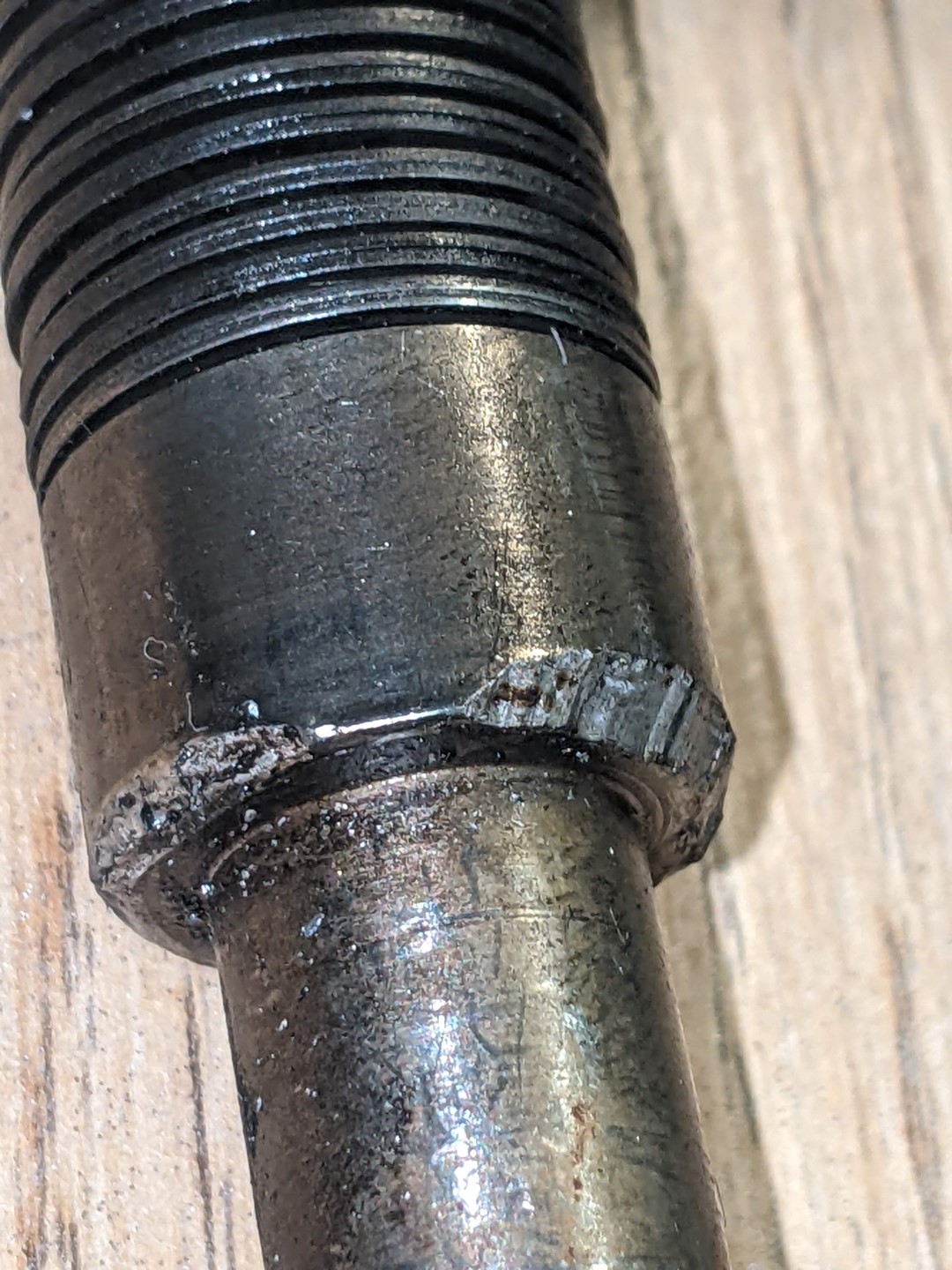 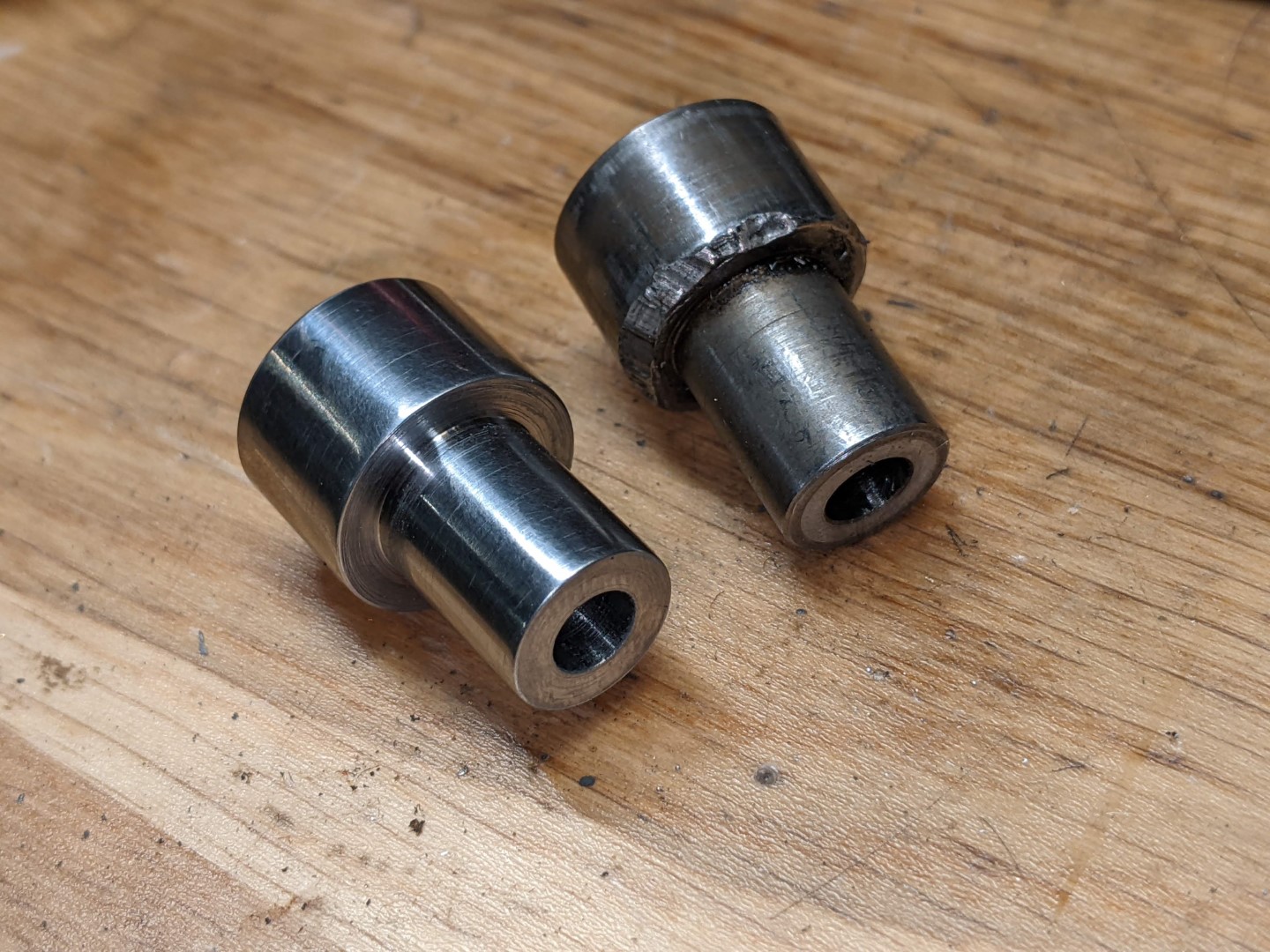 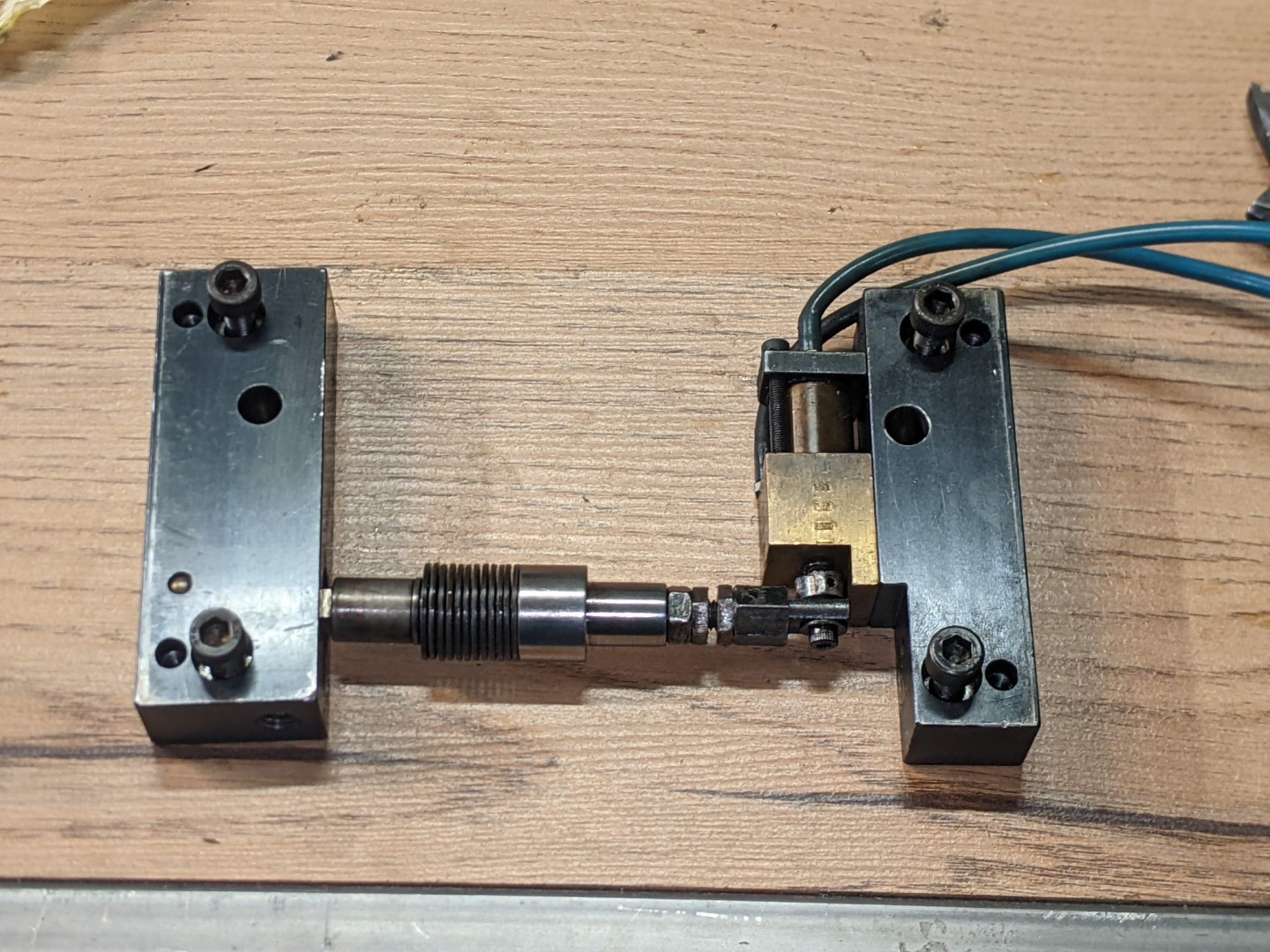 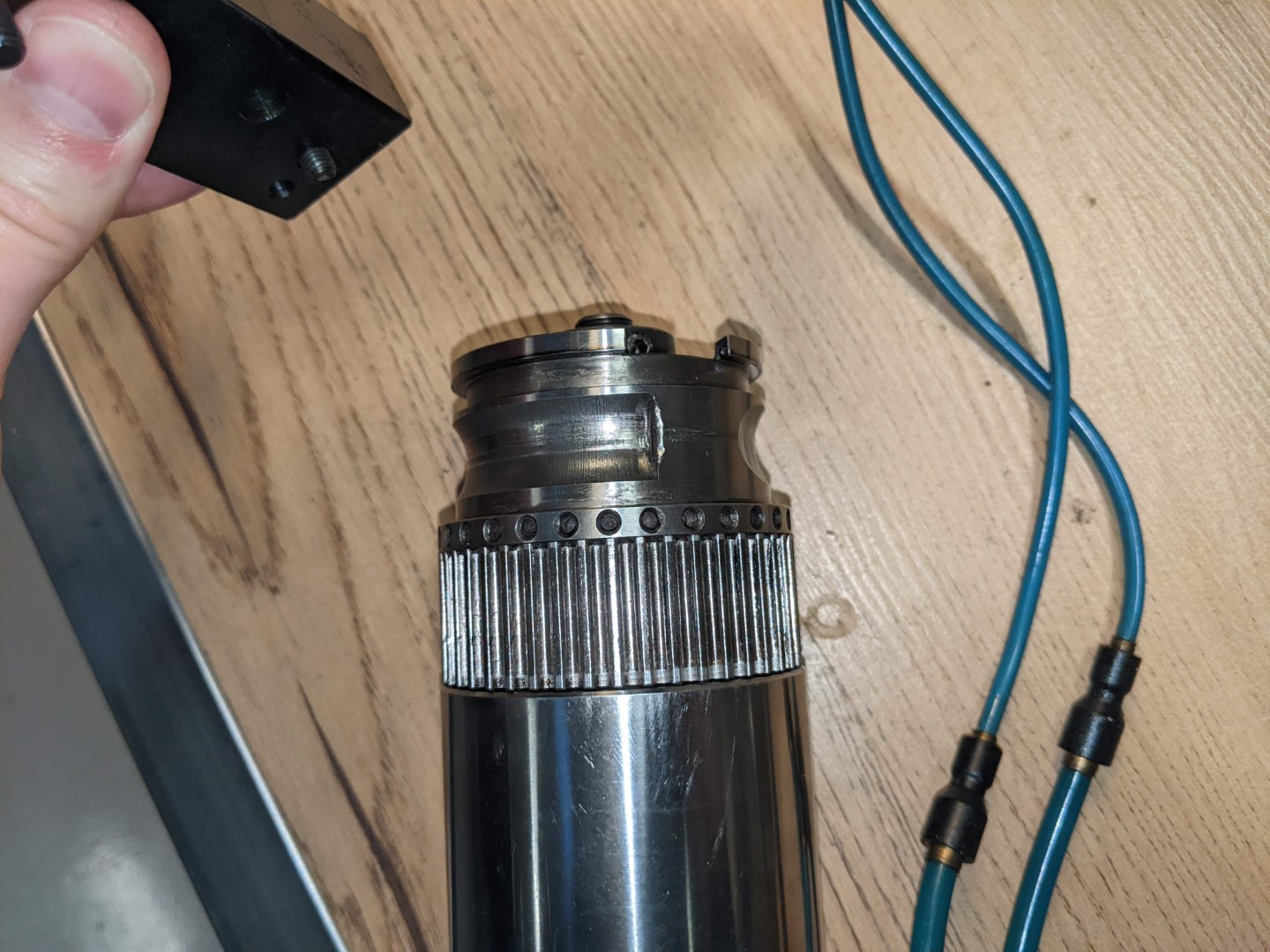 When assemblying the spindle I was a bit unsure about how much tension to put on the belt. I put quite a lot of tension in the beginning but when I turned on the spindle (even at very low speed) the sound was not very nice. I think it came from the belt. In the end I released the motor fixation screws and adjusted the tension on the belt until the sound was good. There was a sweet  spot between lose and very tight that felt ok...

I hooked up a thermometer to the outside of the spindle. Later I put a sensor also on the motor as it turned out that it was the motor that caused the heating on lower rpm:s. In the running in spindle bearing information in SKF:s manual it says that one shall measure the temperature directly on the bearing race. I could not do that and hence I did not expect to see the characteristic peaks in temperature that is common when running in spindles (according to what I have read).

Before taking measurements I let the spindle run on very low speed for several hours just to get an initial distribution of the grease. Then I started the spindle running in process.

During 2h I went through 5%, 20%, 40% and 50% power. As you can see the temperature curve of the spindle is parallel with the motor temp. My conclusion is that up to 50% power it is the motor that is causing most of the heating.

I wanted to go a bit slower above 50% and had no time left that day so I made a new running in cycle another day.

This time I ended up with something like 20%, 50%, 60%, 75%
After 1.5hours I went from 50% to 60% and stayed there for a bit more than one hour. Motor temp and spindle temp still follows each other.
When going from 60% to 75% something happened in the spindle. It definitely started to produce heat itself. I let it sit for 1.5h. I would believe that the speed was something like 10000 rpm. Temperature is still not very high (45C) but I felt like it would be good to get the spindle cooling to work before continuing. After all the temp at the bearings must be quite high if it is heating up the whole metal thing to 45C.

Regarding sound. I do not know what it should sound like but I really had to wear ear protection all the time. That is the same with my other 4000rpm mill so it may be natural. However I would have hoped for less noise.

Less More
03 Apr 2022 12:48 #239167 by MrK
Replied by MrK on topic Retrofitting 5 axis Willemin W400 with LinuxCNC
And some more pictures
At first I used a screw driver like int the picture to put quite a lot of tension on the belt. That caused a lot of noise when running the spindle. 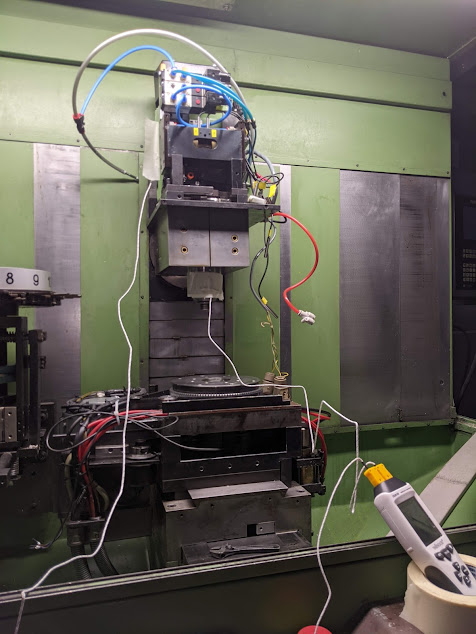 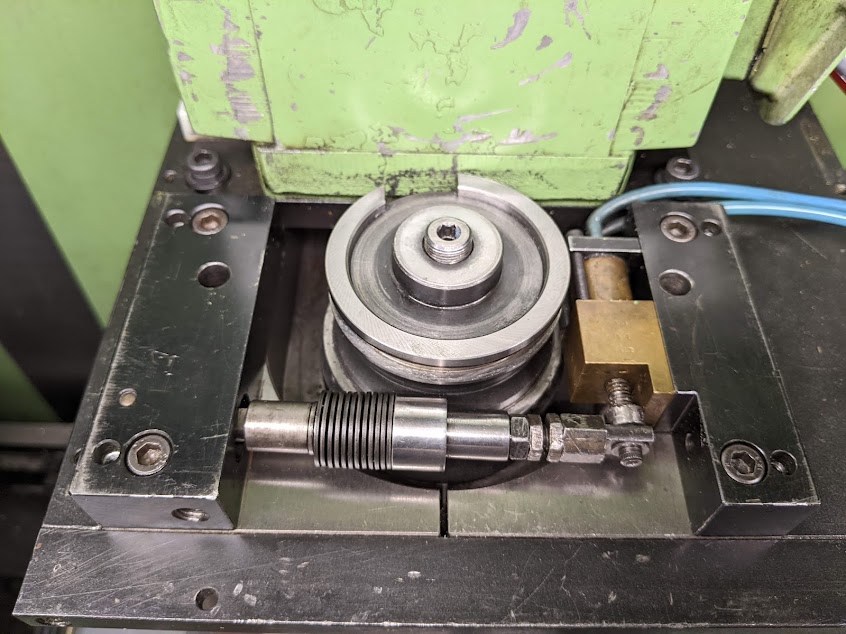 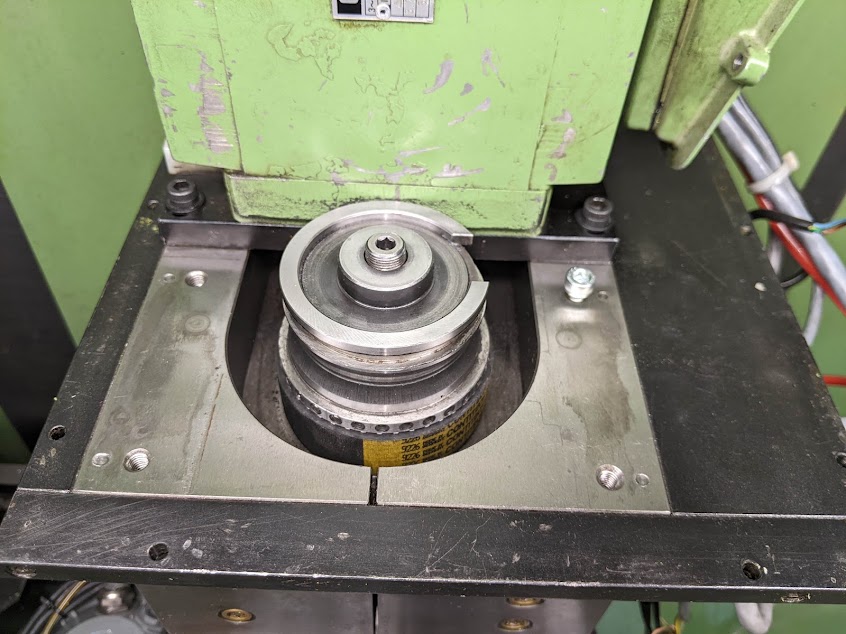 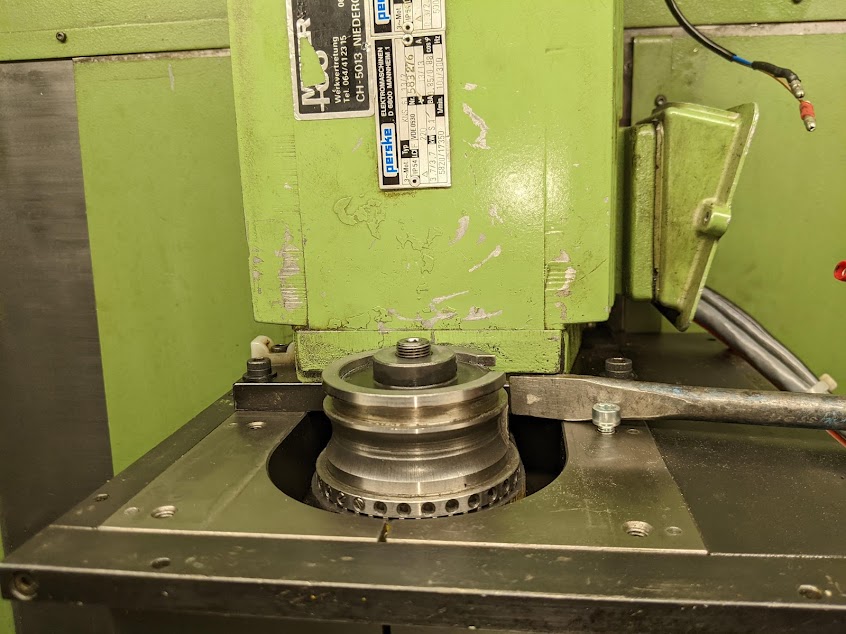 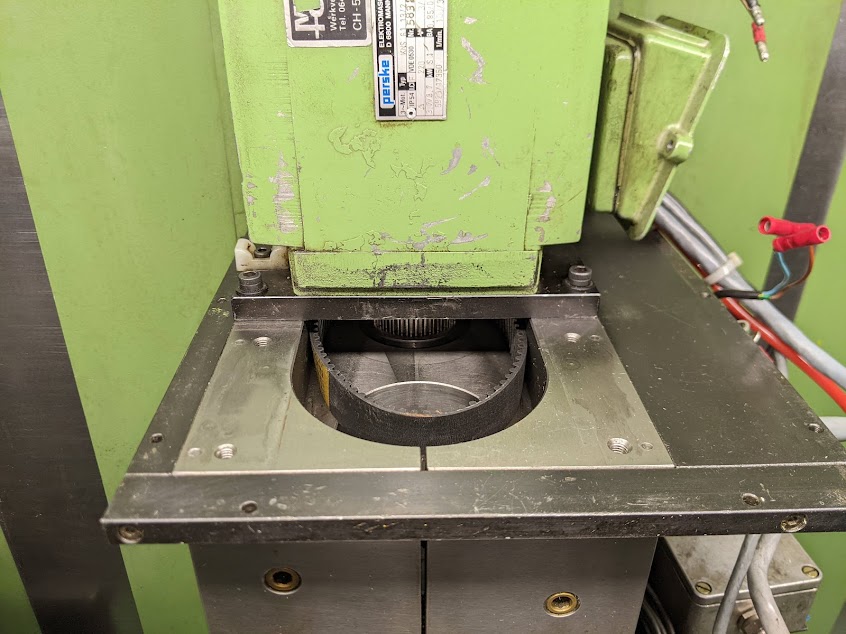 Less More
04 Apr 2022 12:44 #239246 by Todd Zuercher
Replied by Todd Zuercher on topic Retrofitting 5 axis Willemin W400 with LinuxCNC
I'd say that most spindles should be relatively quiet. All that I've worked with have been. None except for hand held router motors (and do those even count as spindles?) would require any kind of hearing protection.

Less More
17 Apr 2022 18:13 #240480 by MrK
Replied by MrK on topic Retrofitting 5 axis Willemin W400 with LinuxCNC
I tested to run the motor without the spindle and it runs up to speed very quiet. So the sound is comming from the spindle (or belt). I am thinkting that I could remove as many parts as possible from the spindle and try again (like the clamping mechanism). Hopefully I can understand better from where the noise comes.

However the spindle is quiet when running on low speeds and I proceeded to try out the clamping mechanism. I want to get the tool changer to run ok from LinuxCNC and then I need the clamping to work.
Clamping was working ok but the pneumatic cylinders are leaking. Also some bearings were in quite bad shape.
This mill has been rebuild by Willemin. Many parts (like ways etc.) looks very good but some parts are really weared out. I suspect the parts that are really weared out could be parts that was never replaced during the rebuild.

So the leaking came primarily from one side of the cylinder. I changed o-ring but it leaked anyway and had some quite deep scratches in the lining. I put the brass liners in the lathe and turned down the ID. I will need to buy a new set of o-rings. ID went up quite a bit because I had to run a few passes before I could find a setting that cut without chatter. After some polishing I hopefully get it to seal really well. At least it allrady looks much better than before.