I had set up my machine a couple of months ago... 3-axis Wells Index 847 machine, then added a 4th axis to that. I wanted some more functionality so I figured out how to add JOG buttons for the different axis. I got all excited and decided to install Glade, and make a killer interface. After three days... I decided to go back to the pyVCP to see if it would do what I wanted...

1) JOG and other control buttons.
2) Easy to read display for mist and spindle running.
3) Indicator to tell if the probe was detecting or not.
4) Ability to call subroutines and/or canned files to do complex "stuff".

After only one day of beating my head against the computer... I figured out how to accomplish ALL the tasks above. I'm going to add even more functionality and clean up the console a bit... but I'm proud of what I have, and I wanted to put it out there for anyone else who may be having issues. You can load it on your machine and tinker as much as you like... my gift to the community. I have a big mill... so I called the setup MONSTER. 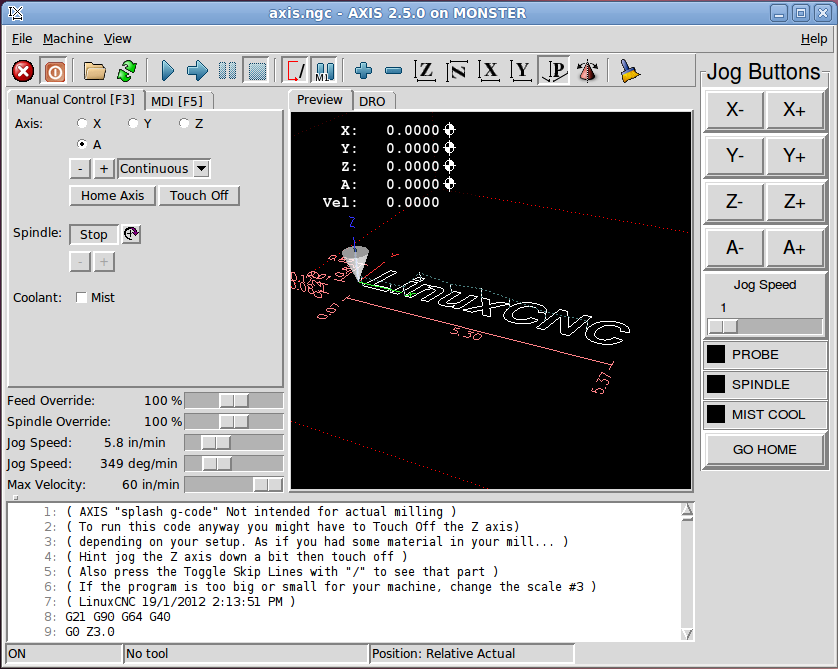 My machine logon is "askjerry" so you will need to change that to whatever YOUR logon is in the path specification.
in the file monster.ini file, you need to findThen change the "askjerry" to whatever your machine is called.

When you want to add new G-Code (MDI) routines to this setup... and you can do 63 more... put them under the [HALUI] section... you will see my first one...This calls the "go_home.ngc" file I have in the ROUTINES folder.

It takes (4) four files to pull this all together...
-- MONSTER.ini
-- custompanel.xml
-- custom_postgui.hal
-- G-Code file(s) in the ROUTINES folder.

MONSTER.ini
Under the [DISPLAY] heading you must specify the name of the xml file that describes how to build all your buttons, LEDs, etc
In my case this line reads...You must also specify the SUBROUTINE_PATH so it knows where to find your custom G-Code, we covered that above.
Also covered above... the [HALUI] section specifies the names of your G-Code file(s).

custompanel.xml
This is where your XML code to build the layout is created. Read the INTEGRATOR MANUAL... it covers this fairly well.

custom_postgui.hal
This file is what connects the panel "stuff" to the actual hardware. You will see lines that look like...Let me break that line of code down for you...
panel-jogxminus is a variable or pointer name that you create for the machine to reference... since it had to do with my panel... I named it with that for a start.
halui.jog.0.minus is a LinuxCNC reference signal... from the AXIS display, click the MACHINE tab, then "HAL CONFIGURATION"... it lists all the pins, signals, and things of that nature... took me two days to figure that out.

<= This is optional... and tells us that the panel is going to send signals to the machine... for the LED... it looks like => because the machine is sending the signal to the panel.

pyvcp.x-minus This is a combination of pyvcp (the name of the panel) and the variable/pointer inside the panel... in this case my x-minus button.

G-Code
Last but definitely not least... I created a folder called ROUTINES where I can put any G-Code files that I want to run.

For the one button I have now... I want to run a file called go_home.ngc so this is specified asin the MONSTER.ini file.

This file is actually pretty simple... move Z up an inch, then go to X/Y/A zero points, then drop the Z down to zero as well. Everybody ends up home.
I know this post is pretty long... but I wanted everything in one place so people could find it.

The ZIP file below is everything you need... unzip the files, and copy them into your configs folder... then have fun.

I hope you find this information helpful.
Jerry

So the panel is moving along nicely... now to get the probe functional... after all, that was the plan from the beginning. The probe is connected to PIN-15 in the stepconfig, so I was able to get it to register as a panel LED just fine. I thought it was all good... but if I issue a G38.2 or a G38.3 command... the "machine" keeps going until it stops at the commanded point... the probe never registers contact. (even though the LED changes states just fine.)


Looking up information on the G-Codes HERE , I get some more information...

I have really been working at it now... I replaced the PROBE LED with two graphics images... so now you can tell exactly what the probe is doing.
I have the image sideways... but only because I didn't want to give up more vertical space. Here is what it looks like today. 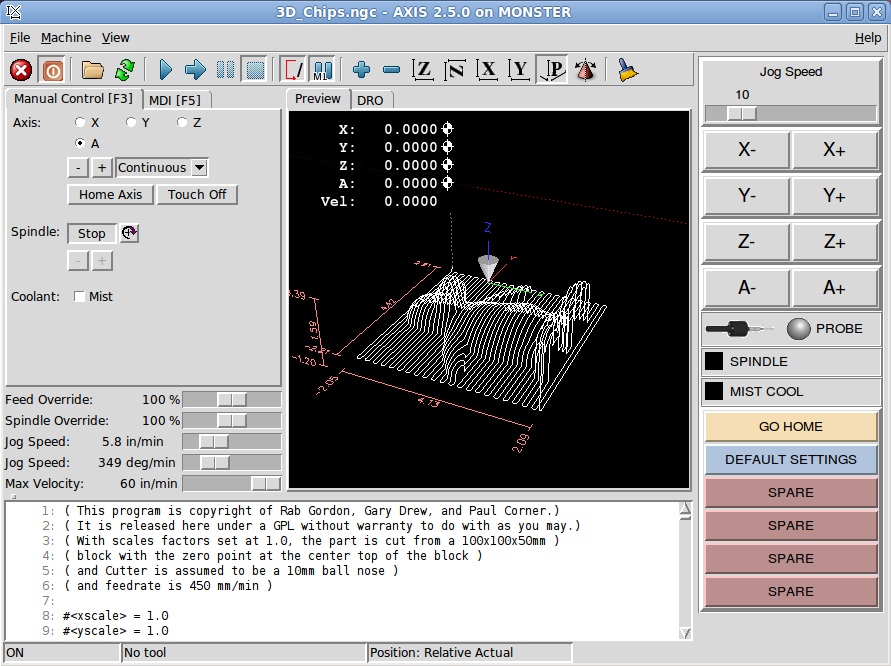 I do have a question if someone can answer it...

I would like to make a button that when I press it, the following occurs...

In other words... one click and the machine realized that "HERE" is the correct location for X and Y.
(I'll use the probe later to set the Z-axis once I see how this step is accomplished.)

I'm attaching a ZIP with this version for you to play with.

Less More
20 Nov 2014 19:42 - 20 Nov 2014 19:46 #53234 by cncbasher
Replied by cncbasher on topic MONSTER - A learning experience... pyVCP machine
Jerry ,
why do you want to move HOME ? this is a once per machine startup session item , i.e when first switched on
this sets the machine internal values and really should not be touched . this is set by your home switches etc and sets other variables
which dont want to be changed .

is what you mean Touch off ( see axis )
People do get confused between homing and touch off , they are not the same thing .
homing is a machine setting , touch off is a user setting , they can of course be the same point in space , which is why it confuses .

touch off :
this is setting the working envelope and interactively moving point zero inside your working area , and can be changed job by job etc

resetting your dro to zero at any point on the table can be done , this is called work coordinates and G54 covers this , you can also to take this a step further
have 6 seperate defined preset points G54 to G59 over your table area .

p.s great work so far , your learning ! , nice to document for others going through the learning curve

Currently that button has this code assigned...
I just thought it might be nice (until I install hard limit switches) to have a single button I could click at startup.
(I'm a lazy guy cncbasher

I started to use the probe... which for now is a piece of wire sticking down... hey, it's just for testing.
I have a switch on the desk in my office to test my routine... and it works great. But then I take the same code and put it on the big machine in the garage... and it is not too happy. I start getting an error something like "Probe tripped during a non-MDI command" Or basically... it is getting a noisy signal and counting multiple hits instead of a single contact. The fix is to tell it after the initial reading... ignore it for a period of time. That's called DEBOUNCE.

I pulled up the HAL Manual, section 9.6 Debounce and started reading... I was only getting about 30% of what it said... very confusing. Then I read other threads and started to piece it together. The manual has...


Which means... load debounce, configure it for some number of filters.... in my case... I only need one.
Okay... that loads it... but next I need to configure it, then assign it to a pin or signal... that gets a bit interesting. And the manual... well... not very friendly...


I had to kludge it together from different posts... but here is what I got...
I was connecting my probe to pin #15 of the parallel port... and I wanted it inverted... so internally that is called parport.0.pin-15-in-not by the system. I needed to filter that signal... point it to the input of the debounce routine. Then... the actual probe signal (now debounced) gets sent to motion.probe-input.

It works on my bench... and at 5:09 AM... I'm going to wait until daylight to try it on the actual machine.
So fingers crossed... and hoping to have MONSTER V7 to upload shortly.

I was going to program an offset... so I would have a touch-plate that you would place on the piece... then it would account for the thickness... but for now... I have it setting Z at 0.0 (ZERO).

The tip is at Z0.0 when touching the work piece.
I have the delay set to 100... might be too much, might not be enough... but it works perfectly so I'm leaving it for now. (Comments?)

Version MONSTER 7 ZIP file is below.

I also made file the paths retaliative in location... so now (in theory) you don't have to replace "askjerry" with the name of your mill.
This should make it more useful to people new to all of this. Now simply unzip and place these files in the CONFIG folder inside the linuxcnc folder.

If you want to tinker... edit the file cmd-02.ngc inside the ROUTINES folder.
For more on the probe... be sure to check out Pete Mills BLOG .

Less More
08 Jan 2015 11:41 #54741 by Askjerry
Replied by Askjerry on topic MONSTER - A learning experience... pyVCP machine
I made some major progress on the Monster Mill project this week... and I thought I would mention it here for those following the thread.

I finally got the HOME sensors installed on the mill... and now I can really see how the TOUCH OFF and offsets work. I was surprised at just how well it all worked...rather than type a lot... I'll just show you. Watch the video below.

Once I get the code cleaned up a bit more, I'll post the Monster V8 zip file here for those who want to learn from it.

The video shows how the magnetic sensors work.

I'll be posting more shortly... but for now I wanted to pass along some of what is going on with the probe. If you set up a machine with a NO (Normally Open) input to the probe... it's ok when nothing is attached... but a probe is a NC (Normally Closed) device. And... if you set up the machine as a NC input... then it always shows a probe triggered unless you install a shorting block when not in use.

My workaround? use a relay to reverse the probe... take a look.


I'll have more information shortly when I begin testing and get the routines all functional.
Last edit: 27 Jan 2015 14:00 by Askjerry. Reason: Insert video link properly.
The following user(s) said Thank You: titorjohn14