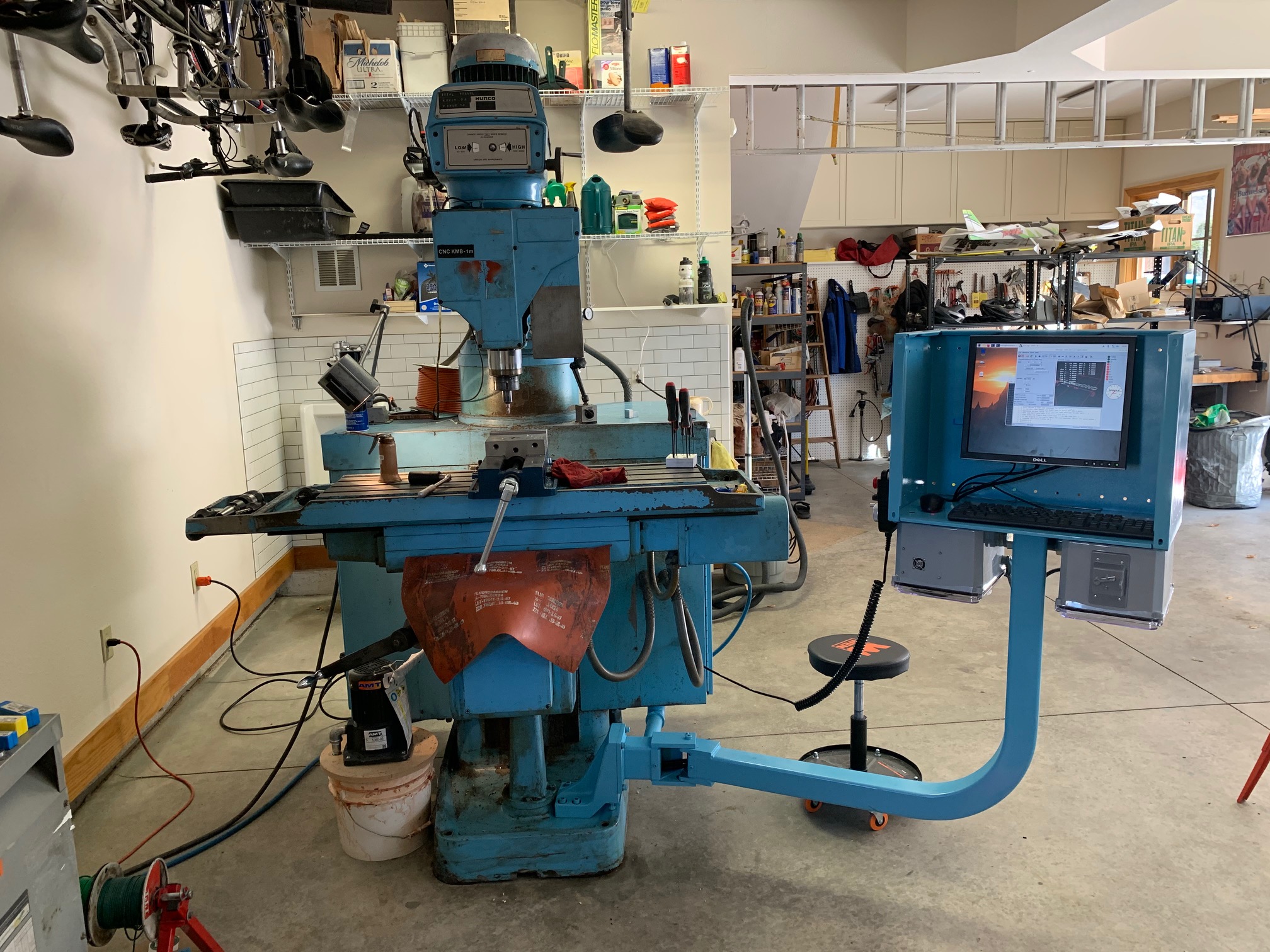 Next up is to try and fix the head. Brake doesn't work. Low gear makes ugly noises. And the quill has about 0.005 runout.

Sorry for have to involve in your thread . I have 3 servo + driver MAX -400 from Electro-craft, I wish to begin one retrofit for my Bridgeport knee. Could you share that MAX-400 instruction manual with me ? Also, I pretty interested to know how Mr Robert did his connection with the MESA board. Could you share it with us ?

I don't really have a proper schematic. Instead I have this spreadsheet that shows how things are connected. I can send that to you if you'd like.


@charlieLedezma
I used EtherCAT for my setup instead of  MESA.  I am using a Dell Optiplex computer hooked to a Beckhoff EK1100 and several Beckhoff EL terminals for the interface.   All of my builds are RIP from source and I only run Debian 7 Wheezy with LCNC 2.7 for my larger machines and have just started trying out 2.8 with Buster 10 in the last year or so....   I am finishing up a small Denford Microturn cnc lathe using Buster 10 with RIP of 2.8.  It is a pristine build as I built the EtherCAT driver from source and never entered ROOT for any of the process...  Have figured out EtherCAT pretty well to so that I can get a pristine install for 32 or 64 bit.

As for the connections, I do have some sheets and info on what I did... the only problem is that I am super busy.... this is the first time in months that I have been on here.  When I get time, I can show how I did my retrofit, but I would say that it is quite involved and not as easy to do as you can with a Mesa board.  If you are very verse with LinuxCNC and can build from source code without a problem, plus be very comfortable with HAL code, then you can go the route I did... but if you are not verse or do not have time to learn how to fully put a system together, then Mesa is the way to go.  There is tons of support and anyone can put it together if they follow instructions as it is well documented...  EtherCAT is pretty much a no mans land for getting help, but there are a handful of guy's that help when they can.

@Wynoose66
That is exactly what i did.  I removed the existing OEM Hurco computer and used a Dell Optiplex 7010 USFF. hooked to the Beckhoff controller wired to everything through the TB connectors.


Sorry that I am not much help at the moment, but just too much going on.  I will try and check back if Leith doesn't help you guy's first.

I missed your post where you talked about the controls... Yes that is all correct about the B and BX control.  I had the BX, but my MPU was upgraded by Buddy Maughon at AMTS in Lawrenceville, Ga... What was nice about the upgraded MPU was the fact that you could leave the machine unplugged without having the reload the master.  With OEM you could only unplug the machine/loose power for 15 minutes tops or you had to go find the master tapes and reload.   Here we loose power at lease twice a year for storms, so it was nice to have the upgrade.

Second that was ultra nice was the DB9 input so you could drip feed to the control from a PC running MasterCAM, or any DNC software.  Simply make the toolpaths in Mastercam, then export to the Hurco (well go to the Hurco control first to receive the file) as Mastercam had a post for Hurco, so no tweaking any code.. just upload.   It worked perfect for us...  It is basically like the old BTR's from the 80's that drip fed to the tape reader from the PC (DNC).

Third you could just flip a switch, restart the machine and it would be in Conversational control.  I loved the old Blue Hurco control setups and was very quick with them...  but one day, flipped on the power and to my dismay the MPU had lost the master.  I was already wanting to retrofit both of our Hurco's, so it jumpstarted me to make it happen.  Truthfully, if I could have gotten another MPU cheap from Buddy, I would have repaired the machine but was already having some issues with the Servo Board and the MPU cost was not justifiable for us ($1500).  Had used EMC in the past and therefore was definitely going to retrofit with LInuxCNC as it is way cheaper to retrofit with.  Just a interface board such as Pico or Mesa, with a basic PC and wire it up.  I went EtherCAT with Beckhoff interface, but that is a little more expensive if you don't shop hardcore... but super expansive.  Another thing is that even though the Hurco specs said it would do rigid tapping, it did not... it was using a T&C tapping head from Universal Engineering to "compensate"... so that was another reason I was wanting to retrofit and get true spindle feedback.

Love the old Hurco control, had it memorized... just too much to go wrong with the computer cage boards and all that wiring to connect all the computer cards... Takes way too long to figure out the problem, especially if it is intermittent and you need to make parts.