what to do with a free scrap dumpster find ? 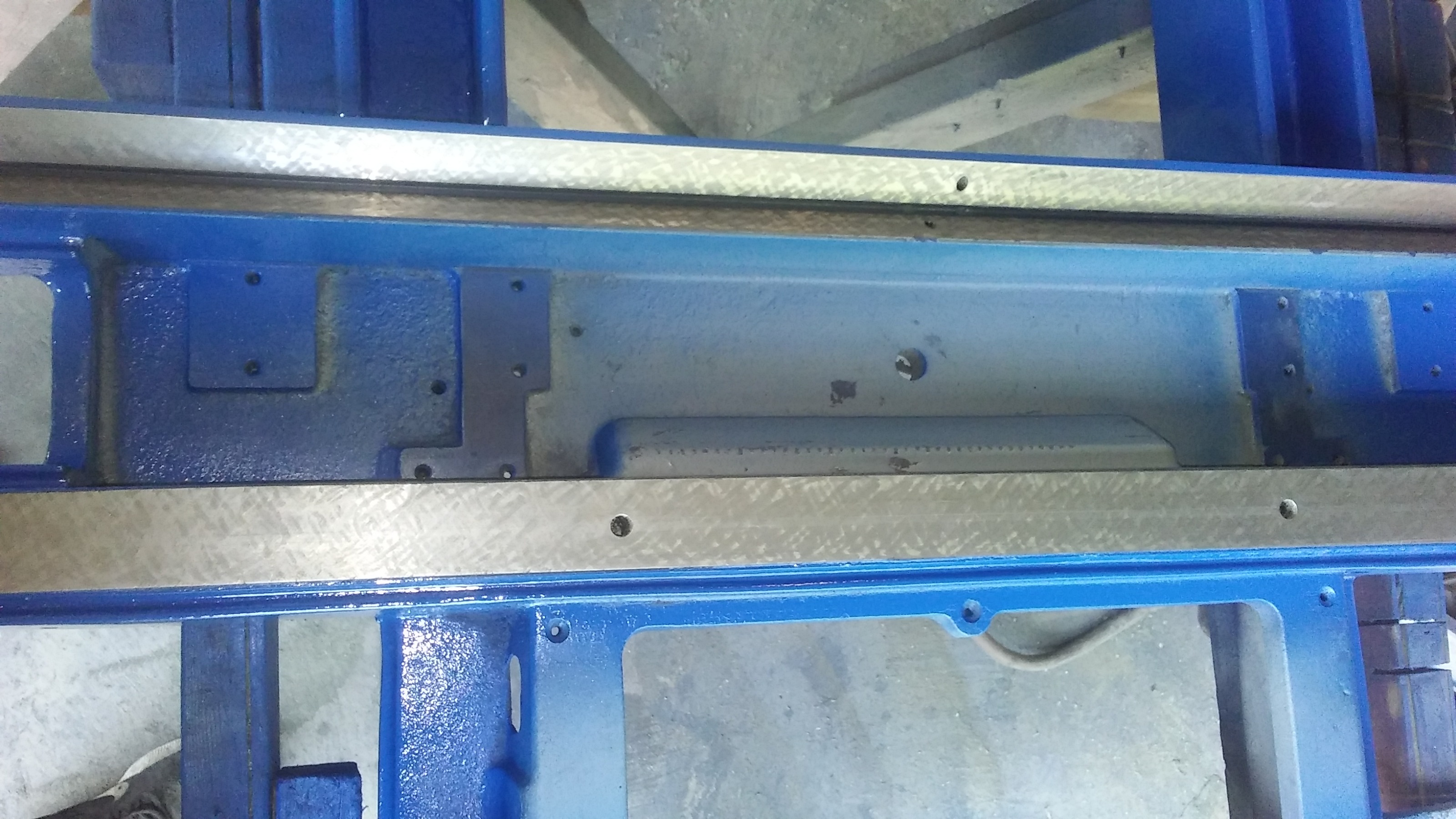 hear are some pictures of the Rulon film and what the ways looked like under that film. i wish everything was lined with Rulon. but the scratches in the Rulon looked about the same as the scratches on the bottom of the table. it was so bad not one little bit of the scraping survived on the mating surfaces of the table bottom. the box ways had some wear but it was what you would expect on a machine close to 50 years old.

i have yet to even find Rulon film as thick as what this stuff is? it's probably around 30 Mil thick and everything i seen was only 10 Mil thick or in sheet form and the price of sheet stock will make your head spin once you see the price.

Less More
01 Aug 2021 16:17 #216621 by andypugh
Replied by andypugh on topic what to do with a free scrap dumpster find ?
The ways look great. Is there any way that the machine could work without the Rulon as a conventional iron-on-iron slideway?

Less More
01 Aug 2021 18:08 #216636 by machinedude
Replied by machinedude on topic what to do with a free scrap dumpster find ?
it does have an oiler and lines but the mating surface is the rough part. the Rulon did a great job at protecting that side but caught and held the grit and destroyed the under side of the table which is not shown. the Rulon had a long oil groove along the center so you would probably have to machine some into the cast iron so the oil can flow?

the original drive for the upper table was set up for a rack so once you take .03 out of the system the gear might bind on the rack?

i was talking to the son of the owner who bought this thing almost 50 years ago and he told me they lost control taking it off the truck when they delivered it and i know it got dropped when they moved it a few years ago to make room for the new 5 axis machines. which i thought it had fallen more than once since i found pins busted in the head bearing assembly that looked like they were broke for a long time

so one hand wheel is busted up pretty bad and the rack was boggered up pretty good on one end. i think the shaft for the handwheel might have been bent to but that's just a hunch.

those ways on top of the saddle are the best looking just because they had Rulon covering them. i wish it was on all surfaces but i still don't know how hard it would be to move since a metal on metal guide is not that efficient . maybe in 1950 it was state of the art but not so much these days

Less More
02 Aug 2021 10:29 #216685 by machinedude
Replied by machinedude on topic what to do with a free scrap dumpster find ?
i think the best solution would be to just forget about scraped ways altogether and just mount so linear ways and ball screws. first off you would create better mechanical efficiency and reduce the need for larger motors to overcome the added friction and you would have a proven system that can handle the high cycling of a cnc machine. so in this case the long and cross travels get new linear ways the head assembly will stay the same and only use the bigger motor there where needed to deal with weight and less efficient linear guides. plain bearings have some advantages because of the amount of surface area in contact. i will add a ball screws on all three.

so as of now that's the plan

good thing this thing was free

Less More
02 Aug 2021 18:52 #216730 by tommylight
Replied by tommylight on topic what to do with a free scrap dumpster find ?
Most probably would have done the same, mostly coz i have plenty of rails and screws collecting dust.

Less More
03 Aug 2021 00:30 #216765 by machinedude
Replied by machinedude on topic what to do with a free scrap dumpster find ?
honestly you have the framework mapped out and lots of the work is done already and have about 1500lbs of quality cast iron to build on. i took this machine with the idea of making it into something useful to me.

i did toss the table up on the mill and checked the outer edge where things were not as bad and i did spend a lot of time stoning the table bottom and ran a indicator down about 2 foot of the table and it was flat. so i have a method to check my flatness as i go so that's a plus.

with a machine with a small foot print i have enough equipment to do things accurate at least. all the modifications are from the box ways up so the table and saddle i can work with on the manual mill

Less More
11 Aug 2021 06:24 - 11 Aug 2021 06:27 #217472 by machinedude
Replied by machinedude on topic what to do with a free scrap dumpster find ?
the more i think about it the more i want a horizontal mill so i have been thinking about doing a BT30 taper spindle with a manual automatic tool change feature. atc would be nice but i don't have the time to waste to brain storm something like that.

I've messed with DC motors for spindles they suck for anything serious. servo's on a spindle are expensive and the ones that are reasonable are not very fast and max out around 3000 RPM which is to slow. what i have never looked at or thought about much was a VFD.

after looking at them for a while i learned a few things that i never knew before so i am glad i looked into them some. i never knew you could use them to run a 3 phase motor from a single phase input. i never looked at 3 phase anything since i only have single phase service at home. after digging some more i seen its common to over speed a motor to a degree by running them beyond 60Hz. it seems pretty common to run up to 90Hz to 120Hz if you have a better motor. from what i seen so far it all depends on the balance on the motor. so at 90Hz on a motor with a base speed of 3600RPM would give you 5400rpm which is not bad. the constant torque rating can vary quite a bit between motors but 10:1 constant torque would give you a range between 360RPM and 3600RPM which again is not bad at all.

some motors have encoders built in for feed back but those are way out of what i would think about spending and then you have some with a 1000:1 constant torque rating and they are crazy expensive as well.

one nice thing about the inverter duty motors are they can be oversized in HP and not add very much cost. the down size is the extra weight but i was not to worried there since this machine had a 1hp motor hanging off the back to begin with so it's built to handle some weight already.

they vary quite a bit too

machinedude wrote:
i think i have a good motor found so now the VFD end needs some research

they vary quite a bit too

Try a search on Amazon for "VFD", "motor inverter drive" and "Variable Frequency Drive" etc, then sort by cheapest.

Though there might be something to be said for going with a known brand, I bought my £17 with the plan to immediately disassemble it and rebuild the input stage as a voltage doubler to see what happens...

Less More
11 Aug 2021 14:28 #217547 by machinedude
Replied by machinedude on topic what to do with a free scrap dumpster find ?
if i knew a lot about them i would probably go cheap but for me the more and better documented the unit is the better i will be at making heads and tails of it. i think Hitachi might be a good choice Japan makes good stuff and they have support if needed as well. not all drives have the same control method and the more advanced ones seem to have sensorless vector control as a control method which i think might be something you might want for spindle control. i started looking through the manual and it's 420 pages of information so that's going to take some time to read through.

the Hitachi are around $300 i think. just about everything on Amazon is made in China these days and the price difference is not as much as you would think. i don't mind paying a little more for something for the extra support and better documentation.

Less More
12 Aug 2021 02:28 #217582 by machinedude
Replied by machinedude on topic what to do with a free scrap dumpster find ?
i think this is what i would need to do what i want. might be higher in price but you get what you pay for. if you wanted you could add a encoder to the motor and provide feed back for a more complex system if needed? but this one does have that option.

these drives are pretty simple for basic manual operation of a motor. they can get complicated pretty quickly once you add control logic in the mix so that part will take me a while to sort out.

and her is the motor i was looking at to pair with this inverter.
www.automationdirect.com/adc/shopping/ca...er_duty/4_in_1/d396a