bevins wrote:
More over, where is the second thcad?


I mounted mine in my control cabinet vertically, 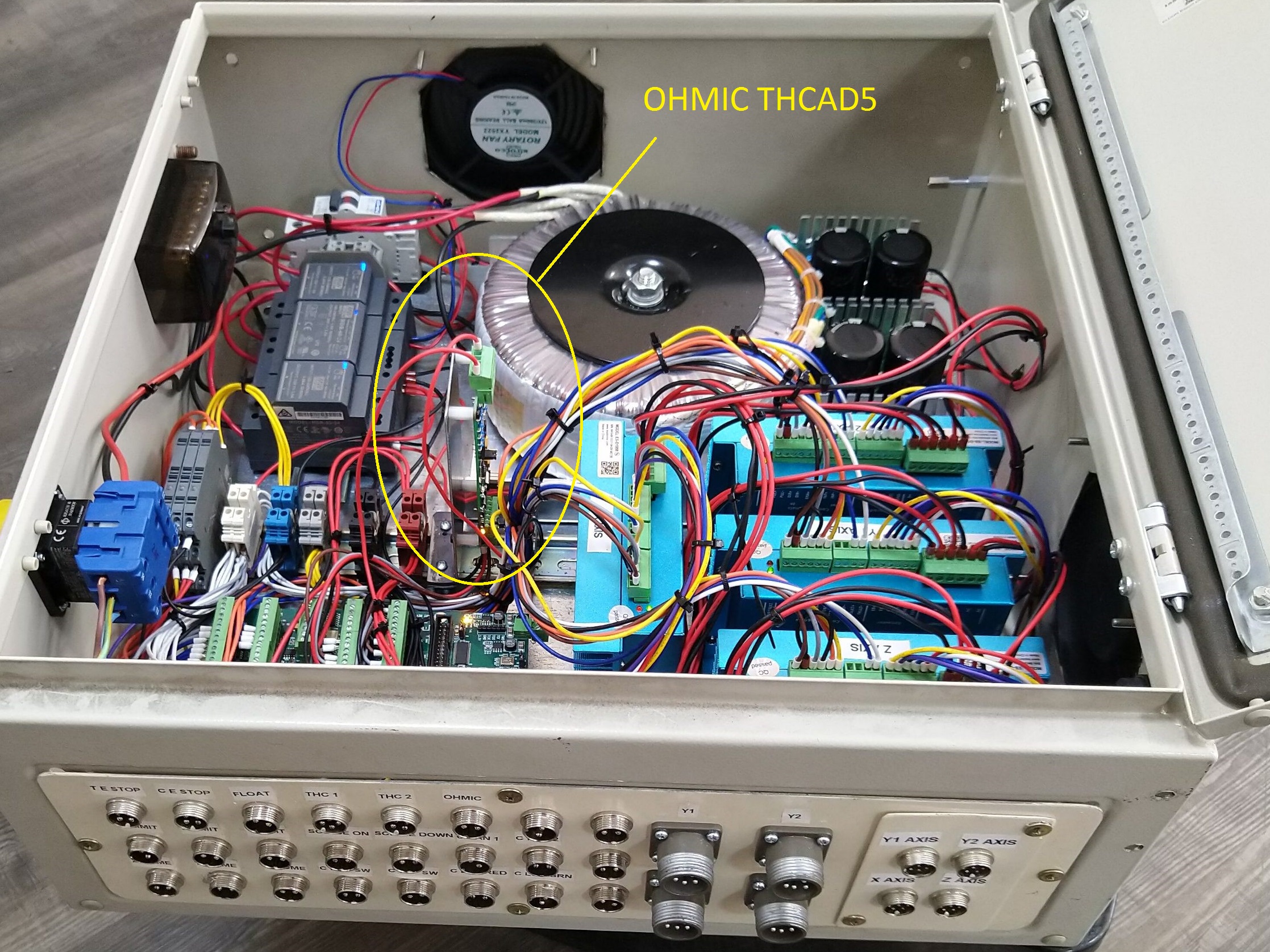 This means is that both the THCAD5 and the DC side of the power supply are totally impervious to the arc voltage. So that means there is no need to turn off the AC power supply to protect anything. In fact, the component I wrote senses a full scale on the THCAD and enables an arc on pin which can only come on if some other voltage (like a plasma arc) is introduced into the sensing circuit.

PCW said leave the relay out and it took me a while before I was confident to do this until I really understood what an isolated power supply really meant.

When I first tested this, I just wired the power supply to another power point but when I wired it in properly I used a relay I had. It probably makes sense to drop this relay in an estop condition as the voltage is on the table and we want to isolate everything.

From memory, Islander261 had some unconfirmed third party reports that if the circuit was continuously left on, you could get some corrosion in the torch consumables on a water table so it was another reason I added the relay.
Last edit: 17 Dec 2019 03:53 by rodw.

bevins wrote:
More over, where is the second thcad?

On my machine, the real arc voltage THCAD is buried elsewhere in the control box beside the 7i76e The one in the photo is mounted on the door via a DIN rail just for hypersensing so the photo shows everything you need as per the circuit diagram.

We cut 2 sheets of 2mm steel last week and everything worked pretty perfect. Sometimes the torch would get a splash of water and sense the material far too high, but it is just a matter of hitting pause and restarting so Plasmac's error recovery kicks in and sorts it out. Once or twice water got up the nozzle and the probe came on when it shouldn't. That is the purpose of the ohmic test button (to diagnose this condition). Eventually, I worked out the easiest way to fix this was to turn on the torch air flow on the plasma machine console to dry it out and then hit resume in plasmac. My Thermal Dynamics has a manual air pressure regulator which is set with the air flowing. I'm not sure if others have this feature but Plasmac has the answer as you can use the torch pulse function to achieve the same thing.

You just need to edit your ini file to load this hal file after all the others are loaded.
Plasmac's upgrade process does not appear to break it either.

Also the Ohmic Component used here is available in Version 2.9. That means it is deployed with any V 2.9 build and there is a link to the documentation from the main V 2.9 doc page if you click on EXPAND MAN PAGES towards the bottom. I leave that expanded all the time.

Thanks Phill for deploying these updates
Last edit: 23 Mar 2020 04:28 by rodw.
The following user(s) said Thank You: tommylight, razplaz

Less More
07 Apr 2020 16:53 #163080 by Uthayne
Replied by Uthayne on topic Hypersensing with THCAD - better way to do ohmic sensing
Just went through installing this for my machine and had a few issues that I worked through. Documenting them here in case anyone else needs it.

My biggest issue was after I wired everything up, I was getting 60 Hz influence on my THCAD-5 input IN+/-, which would oscillate ohmicsense.ohmic-volts from 0V to 24V when the ohmic cap and table were not connected. Removing the input plug to the THCAD-5 produced a stable ~0V output. The issue was that I did not have a ground connection to my table/frame, separate from the 24V PSU V- going to the table. As soon as I connected the "table" wire as diagramed in the manual to ground, it all went away and was stable at 0V. It seems obvious thinking about it now, but it took much longer than I'd like to admit to figure that out.

Secondly, I was having ohmicsense arc-on triggering because the output voltage was above 24.5 volts. I fixed this by tuning the PSU output to 24.00V after everything was connected. Previously I had set it @ 24.00V when it was not attached to anything. Now it does not trigger the arc-on bit. I have yet to cut with this and see what voltage is shown when the arc actually does short to the shield.

Lastly I could not get the ohmicsense.is-probing bit to go true while probing. In my hal file I changed

Now ohmic "hypersensing" works great with the little dry-run testing that I have done.

Could this component be used for detecting tip-ups during X/Y movements? The arc would be off as it is moving between cuts, but it would be nice to have it be able to detect collisions. I have a mag breakaway mount, but this could be an extra safety. As I understand, this component is only active while plasmac is probing, so currently as is it may not be able to detect a jog collision. Thoughts?
The following user(s) said Thank You: dvn4life1972

Less More
07 Apr 2020 20:30 #163093 by rodw
Replied by rodw on topic Hypersensing with THCAD - better way to do ohmic sensing
Its great to see someone is gaining benefit from this method.
I will have a look for the hal pin documentation issue. My config predates Plasmac so I may not have a standard hal config even though I tried to bring it back to standard plasmac with about 100 lines of hal code in my connections hal file.

Are you saying you did not initially have the THCAD shield connected to ground? My control box is bolted to the table so everything including the table is grounded back to the mains earth via an EMS filter on the mains input to the control box. In an earlier relay circuit I had some issues similar to what you describe but I forget the details.

I don't think it can be used as a sensor while cutting becasue in my testing, it just went to full scale indicating it was sensing the arc voltage. I did add a pin ohmic.N.arc-on to indicate this. ( I knew the THCAD will report a bit > 5 volts internally.)

As an experiment, try jogging down to trigger an ohmic sense at your finest jog resolution and watch the pins in halshow. You should see the voltage ramp up with each click of the jog wheel as contact is made (mine does this over 3-4 clicks of 0.01mm). This was the Ahah moment I had when putting this together from PCW's quite mad ideas!

Less More
07 Apr 2020 21:18 #163103 by Uthayne
Replied by Uthayne on topic Hypersensing with THCAD - better way to do ohmic sensing
I did not have any connection from my table to earth ground. Therefore the 24v isolated psu V- wire (labeled as going to the table in the primer doc) was never connected to ground. The shield on the thcad was connected to ground bus.

Don't need or want to use the ohmic sensing component while cutting, thc should take care to prevent collisions while cutting. Only while jogging between cuts would I like it to be active. It would throw the same error as plasma "ohmic probe tripped before probe height" or something similar, I can't quite remember it right now.

I did notice the voltage creep up over a very small distance. That is incredible how fine it can measure

Less More
07 Apr 2020 21:42 #163106 by rodw
Replied by rodw on topic Hypersensing with THCAD - better way to do ohmic sensing
As its coded, the probe signal only works when is-probing is true.
I did this becasue I was getting spurious probe errors with pre-plasmac configs.

I think the source needs to be modified
github.com/LinuxCNC/linuxcnc/blob/master...omponents/ohmic.comp

I did think you might be able to setp the is-probing pin to 1 but I don't think the signal will turn off when the low threshold is reached as its presently coded.

I'll have a think about it.

Less More
07 Apr 2020 21:51 #163107 by rodw
Replied by rodw on topic Hypersensing with THCAD - better way to do ohmic sensing
The change will make a bit of a difference in the algorithm becasue if the voltage is full scale, the probe signal cannot be on. It will be if the pin is setp'd

Maybe there should be a pin that enables always-probe

I am gearing up to cut this so I think it will find any issues. 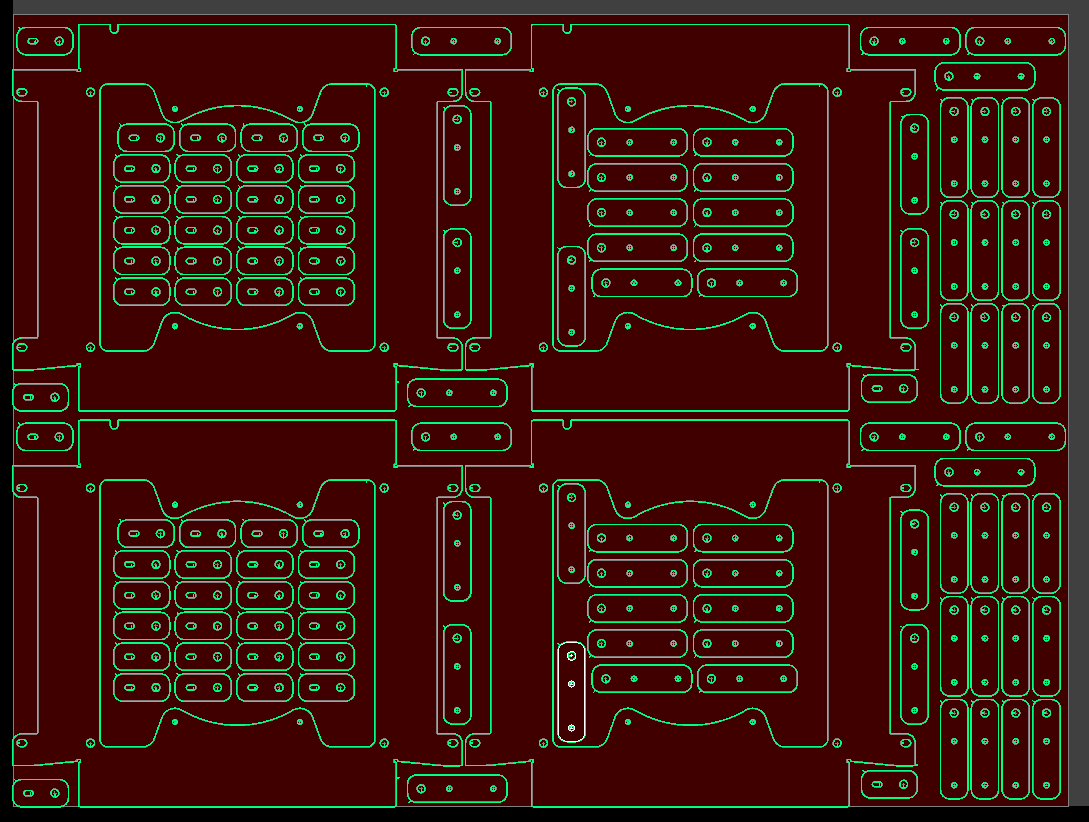